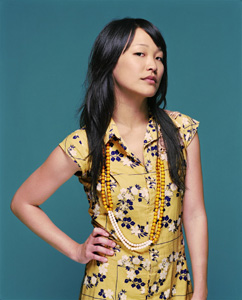 A picture may be worth a thousand words, but what does it say about the artist? Andy Warhol’s white hair and Jean-Michel Basquiat’s signature coif are nearly as recognizable as the works they produced.

The widely known details of the lives of these modern art icons give the public a more intimate understanding of the work they produced. However, the audience does not always so easily get to glimpse the master behind the creation.

Photographers Tatiana Willis and Roman Cho decided to tackle this idea in a series of portraits entitled Heroes & Villains. The idea was to give modern-day urban artists a face in the community and to capture the essence of the art in the artist.

In the three years since the collaboration began, Willis and Cho captured intimate portraits of some of the biggest names in pop surrealism, graffiti and alt-comic art. Some of the over 50 artists photographed for the show include Shepard Fairey, Gary Baseman, Tim Biskup, Friends With You, Audrey Kawasaki, Mark Ryden and Kelsey Brookes.

According to Cho, the name of the show pays homage to the nature of underground, lowbrow and urban art. It also gives a nod to the comic artists in the series without conjuring images of flying men in tights. Heroes & Villains is a play off of the general themes of good vs. evil that appear in many of the artists’ pieces and the idolization or degradation of the artists themselves.

The show will debut at the Corey Helford Gallery with an opening reception on April 22 from 7 p.m. to 10 p.m. Many of the photographed artists will be in attendance. After its L.A. stop, the show goes on the road to San Francisco and beyond.