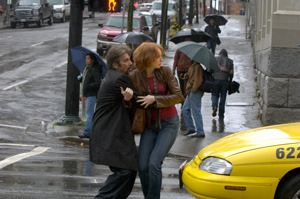 Al Pacino has become a staple of the suspense thriller. Ever since his work in movies like Taylor Hackford’s The Devil’s Advocate and 2003’s The Recruit (opposite Colin Farrell), Pacino has taken on an almost patriarchal role –pitting him against the wiles of a much younger, equally cunning villain.

The veteran actor delivers another powerful performance in Jon Avnet’s 88 Minutes. This time, Pacino plays a college professor named Jack Gramm, a world-famous doctor who has been called to testify to the mental state of a murderer on trial for a series of slayings. When his testimony leads to the man’s incarceration, the killer vows to seek revenge.

Nearly a decade later, the good doc has heard nary a peep from the dark side. That is, until a series of murders – eerily similar to the ones that put his foe in jail – begin to surface. Is it a copycat killer, or has Dr. Gramm helped put an innocent man in jail?

88 Minutes marks the first time that Pacino has worked Avnet. Going into the collaboration, the celebrated director admits to a little trepidation.

“I wasn’t sure whether our personalities would click or clash, since we’re both kind of high-strung, opinionated people,” says Avnet. “But like any living person, I’m an admirer of his work. He may be the best working actor in the film business today.”

Joining Pacino onscreen is a cadre of some of the finest young stars in Hollywood today. Ben Mckenzie (“The O.C.”) and Leelee Sobieski (In the Name of the King) appear in scene after scene with Pacino.

Also in the cast is the fiery-haired actress Alicia Witt. Many fans may remember her from roles in Four Rooms and the hit sitcom “Cybill.” In 88 Minutes, she portrays Kim – Dr. Gramm’s assistant.

Witt gives a sultry performance that harkens back to the days of Veronica Lake and Lauren Bacall. Even Avnet admits to being blown away by her presence, on and off the screen.

“She went through a laborious audition process, and she was very responsive in that sense, somewhat fearless. She’s a great spirit and took a pretty challenging part. She didn’t let the fact that she’s so smart get in the way of the emotions of the character,” he says. “Her vulnerability allowed her to come up with a performance that I think is pretty special.”

For all the praise that her director gives, Witt is very quick to reciprocate: “He watches very closely, and he notices a lot more than most people do,” she explains. “He knows how to talk to an actor to get the result he’s looking for, without making you feel like he’s judging you. He is so receptive to ideas and feedback, and he’s really wonderful about listening to what other people have to say.”

Witt has spent most of her career working for some of the more offbeat and subversive names in the industry. She was reportedly discovered by David Lynch after a television appearance as a child. Although parts on the big and small screen have been her bread and butter, the actress also counts music as one of her many loves.

She composes original works and performs them on the piano. Witt has been known to deliver her pieces in intimate settings, such as the Mint in Los Angeles. She has also garnered a whole new legion of fans with her impressive work as Detective Nola Falacci on the long-running NBC drama, “Law & Order: Criminal Intent.”

Yet, it is her role in 88 Minutes that has people buzzing and thrilled that a new legend in the making is getting the kind of work that matches her stellar talent.