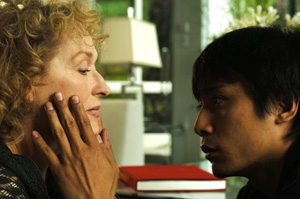 Liu Xing (Liu Ye) is a brilliant Chinese student studying cosmology in the United States. He subsists on boiled noodles and lives in a cramped studio apartment.

When he’s not in a lab constructing virtual models of the universe for his professor (Aidan Quinn), he spends time learning about Western culture with a wealthy university patron (Meryl Streep). It’s in these brief, intimate scenes that Dark Matter is most effective.

That being the case, we’re never quite prepared for Xing’s violent behavior. Director Chen Shi-Zheng was himself a Chinese émigré who rose to international prominence in the ’90s as a world renowned opera director. Perhaps he knows his subject too well, or not well enough, to explore Xing’s motivations with any clear depth.

Streep is incapable of bad acting, and there are plenty of creative visuals for the art-house crowd to which Dark Matter is sure to attract.