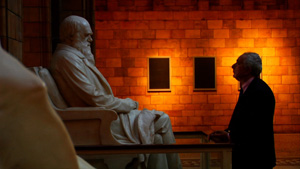 Though this documentary’s purpose is to state the case against bullying by the scientific community against those that propose Intelligent Design as a viable, non-religious option to the theory of Evolution, all it shows is how Intelligent Design is very much a religion-fueled philosophy.

The segments that show interviews with pro-I.D. theorist Dr. Stephen C. Meyer stand on their own as compelling. Yet it would appear that the agenda here is that two wrongs do make a right as the filmmakers bully the alleged bullies.

Ben Stein is the narrator and co-writer of the film. He offers a few laughs, but mostly leaves you wondering if the whole premise is a joke.