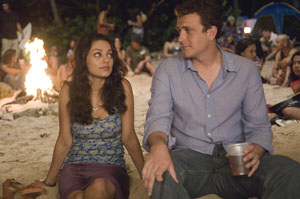 Thankfully, the film lives up to its ingenious campaign. The “Apatow boys” have once again brought us comedy gold.

The synopsis is undemanding. Peter Bretter (Jason Segel) gets dumped by celebrity girlfriend Sarah Marshall (Kristen Bell). In an effort to get over her and move on with his life, he goes to Hawaii for a vacation.

Only problem is, she and her new rock star boyfriend are staying at the same hotel he is. During his stay, he meets a number of interesting characters, including the new girl, Rachel (Mila Kunis). The result: one more gem from the guys who brought you last year’s Knocked Up and 2005’s The 40-Year-Old Virgin.

Although at times Sarah Marshall delves slightly into the land of raunchiness, it still manages to make simple and profound statements about the volatility of relationships.

*A little back story on one of the most hilarious comedies since Annie Hall. For years, Sarah Marshall star and screenwriter Jason Segel (“Freaks and Geeks,” “How I Met Your Mother”) and Linda Cardellini were a couple. They played a couple in Dead Man on Campus and again on “Freaks and Geeks,” and somewhere along the way they decided to do it for real.

Unfortunately, after “Freaks and Geeks” was cancelled, Segel’s career didn’t take off with the same trajectory as Cardellini’s. While he was landing bit parts in indie movies and other cancelled TV shows, she was rising to fame as a prominent actress, starring in two Scooby Doo movies and becoming a series regular on “ER.”

But as the saying goes, “He who laughs last.” So while Cardellini may have dumped Segel for, according to the movie, being a bum, he’s now an accomplished screenwriter and TV star and well on his way to becoming a big-time film actor.

And I bet most of you reading this still have no idea who the hell Linda Cardellini is.