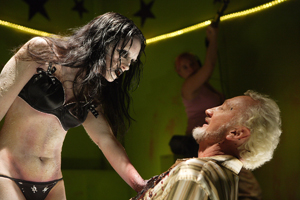 I mean ... Zombie Strippers. Low expectations from the get go, right?

The film begins with a low-tech explanation of a not-so-distant future when Bush has finagled his way into a fourth term and the U.S. is dealing with a troop shortage in the face of a multitude of wars that our crackpot leader has provoked in several countries. To remedy the problem, government-funded scientists develop a chemo-virus that enables troops to reanimate after death and continue fighting. While testing it out on the homeless, illegal immigrants and the American middle class, the virus finds its way out of the lab and into a nearby strip club.

Although subtlety is clearly not the film’s strong point, it harps on some poignant themes, a la Ionesco’s play “Rhinoceros,” by comparing the apathy and zealous conformity of the American populous during the Bush administration’s reign of terror terror to the way in which the strippers willingly join the legions of undead in order to become better strippers, making the strip club owner bundles of cash while innocent men are brutally killed in the process.

At the end of the film, one is left pondering: am I a zombie stripper, a strip club owner, a strip club casualty or did I proactively do all I could to keep Bush and his neo-con junta out of office in the past two elections?