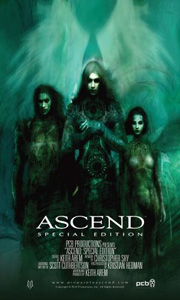 The Purgatory Wars between the forces of good and evil have been raging for eons, leaving heaven decimated. Now a fallen angel must cull the forces of his army from Earth.

The artwork utilizing every trick in the Photoshop arsenal is a dark mass of swirling spirits, figures’ faces washed in red, sometimes becoming so mired in shadow and effects that one struggles to make out a picture at all. The otherwise fascinating illustrations can’t save the vague and stilted storyline. Still for fans of dark fantasy and the veritable subgenre of Book of Revelations-inspired apocalyptic tales, it won’t disappoint, but don’t look for anything too original.