Dishing the 'Dirt': The Scoop on Ryan Eggold 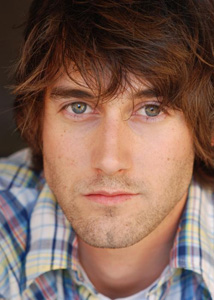 Ryan Eggold is a name to remember. Within two years, the 23-year-old Southern California native has shot from guest star on “Related” to two-time “Entourage” cast member and series regular on FX’s deliciously dishy “Dirt.”

His success has been more than sudden; it was sink or swim. He was cast at 8 p.m. the night before he began filming his first episode as Farber Kauffman, an idealistic Columbia Journalism School grad weathering the seedy, steamy tabloid world of Dirt Now.

Within hours, he was on set with Courtney Cox, an actor he’s admired for years. (Eggold was born the same year Cox charmed the world in the Brian DePalma-directed, Bruce Springsteen music video for “Dancing in the Dark.”)

“There was no time to process, no time to get nervous,” Eggold remembers. “It was weird, being a fan of hers and then working side by side. There was no transition time.”

Luckily, Eggold had been preparing for that moment since he was 13. In junior high, he was known as a troublemaker. Constantly talking and telling jokes in class, he became a regular fixture of detention hall – but he discovered he liked making people laugh. When a friend invited him to attend an acting class, he felt like he’d found home.

“I liked getting praised for being a goof,” he says.

But it wasn’t just about being a cut-up.

“I started learning all the different aspects of acting and fell in love with everything,” he says.

There is a joy and a reverence in his voice when he talks about his work, which he describes as “storytelling” and “people sharing wisdom.” But acting in 2008 isn’t all about sharing wisdom. The Perez Hilton-ification of the world has changed the playing field, and Eggold is getting his first “Dirt”-ier tastes of stardom.

Recently, rumors (pun intended) have been rampant about a covert love affair between Eggold and Rumer Willis, Bruce and Demi’s eldest daughter. When asked what it feels like to have your life become tabloid fodder, Eggold just laughs.

“As an actor, I don’t necessarily want to be famous, but I want recognition. And there’s a fine line on what that entails.”

“I was invited to the ‘Entourage’ wrap party and was so excited. I show up at this amazing Malibu beach house, and I see all these paparazzi, and they just start gunning for me! I mean, literally about to run me down. It’s crazy and I don’t understand what’s happening … and then I look and see Kevin Connelly is behind me.”

Eggold has a realistic view about the business of gossip.

“You see how much the truth is twisted and turned to make a buck, and it’s almost another show,” he says. “But it’s just business. These guys are simply doing a job.”

As far as Eggold’s job as Farber Kauffman, there are other unexpected rigors.

“I shot my first nude scene, and I had this little kid mentality of ‘Naked Time! I’m on set naked! All right!’” he says, still sounding genuinely excited, but then he pauses. “Now I’m realizing, it’s going to be on national TV.”

As we await his “NYPD Blue” moment, we wonder: What other dirt can we dig up on Ryan?

What’s the best lie you ever told?

An excuse for cutting class senior year of high school: “I was attacked by a hippopotamus. It was vicious.”

Have you ever cheated?

What’s your favorite music to listen to when no one’s around?

Boyz II Men, “I’ll Make Love to You”: “They’re so passionate and sincere.”