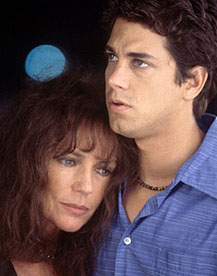 Decades after working with such legends as Frank Sinatra, Francois Truffaut and Anthony Quinn, internationally acclaimed actress Jacqueline Bisset continues to star in films. This time, Bisset pairs up with young Australian actor Adam Garcia in the romantic thriller Fascination.

Filmed in steamy Puerto Rico, Fascination is about a recent widow, Maureen (Bisset), who returns from a cruise with a new man, played by Stuart Wilson. This turn of events surprises her son, Scott (Garcia), who soon finds himself falling for the man’s daughter, Kelly (Alice Evans). The two develop theories about their parents, who might have known each other longer than they let on. As these thoughts turn to conspiracies and murder, the relationships heat up, and so do the conflicts. In the end, no one can be trusted.

The director of the film, Klaus Menzel, wanted a feeling of intimacy on the set of Fascination. Bisset details an interesting technique he used for the actors’ first read-through.

"It started on a slightly odd note," she remembers. "Klaus said, ‘I want you to know about tantric sex. I want you to have lessons.’ I sort of froze. I was thinking, ‘I know how to do love scenes.’ My reaction was, ‘Stop!’ We’re actors, we know what to do."

Menzel went so far as to bring in an expert on the subject, but was eventually talked out of having her teach the cast. Bisset describes the first read-through as always being important, where actors can be very possessive. "I rejected it completely," she recalls.

However, Bisset and Garcia both had kind words to say about Menzel’s passion for the project. "He was incredibly enthusiastic," Bisset says. "He’s an optimistic man. He’s a lover, a romantic, but with a dogged personality. He became a good friend."

Like Bisset, Garcia heard about the project from a friend. "My friend said, ‘There’s this crazy German director who wants to meet you,’" Garcia says. "His overwhelming enthusiasm convinced me to do the film."

After the hurdle of the initial read-through, Bisset said the production was an enjoyable and insightful experience. After her many years in the industry, she finds she still gains knowledge on every film set. "I’m constantly learning," she says.

Throughout it all, Bisset has clearly matured, gaining a serene confidence along the way. "I’m not frightened," she says. "A lot of it is that I really don’t care about certain aspects of what people think about me. I now feel very fearless. Back then, I had no idea what I was doing, comparatively. I felt inhibited."

Garcia did not seem to feel overwhelmed acting with someone of Bisset’s caliber. However, he did have a great admiration for her.

"She’s so beautiful, it’s kind of crazy," he says. "She’s a wonderful actress."

Bisset says that there is a certain "fear level" for every film. For Garcia, the fear level on this film might not have been acting alongside a legend so much as the stunts he had to perform on his own. One of them called for hanging off a roof, 60 feet in the air.

"Well, it’s an independent," Garcia says with a smile. "That was kind of a bit hairy. There was some matting, but I enjoy that."

Garcia’s words seem to complement what Bisset says about the making of a film. "You gotta go for it in life, and in film," she says. "But be sensible enough to make yourself comfortable."

With this new venture, it seems that Bisset is not holding back, playing a conflicted woman, one who could be guilty of several crimes. In the filming process, there were some obstacles to overcome. As evidenced by her reaction to that initial read-through, though, she seems to be in control of her craft. She will next appear with Keira Knightley in the new Tony Scott film Domino.

No matter which film she is working on, Bisset says she always remembers a personal pledge. "Find out what could go wrong, be aware of that, and go for it," she says. "It’s about being prepared. Learning your lines is the least of it."