Born Into Brothels: Documentary Filmmakers Change the Lives of Children in Calcutta 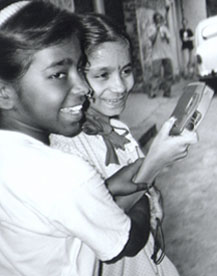 Born Into Brothels is a documentary that looks at the life of a group of children who live in a brothel in Calcutta, India. While their mothers work as prostitutes, the children are documented by filmmakers Ross Kauffman and Zana Briski as they strive to survive in the red light district in which they were involuntarily placed.

Briski, a New York-based photographer, teaches each of the children how to use a camera, causing them to look at their world with new eyes. Over the course of the three-year shoot, Kauffman and Briski capture the transformation of each of the children they come to know.

After taking home over 20 film festival awards including the Audience Award at Sundance 2004, Kauffman and Briski are ready for Los Angeles to see their film, which will be released on Jan. 28. Just hours before they accepted yet another best documentary award from the Los Angeles Film Critic Association, Kauffman and Briski sat down with Campus Circle to discuss the making of Brothels.

"When I arrived in the red light district of Calcutta, I had no intention of teaching children photography," Briski says. "I was really fascinated by the lives of the women [working in the brothels]. That was really my focus. [But the kids] would just come up behind me – I had my camera on my shoulder and they would try to use it.

"I just thought it would be great to teach them. I tried doing both, but then the kids completely took over. It was kind of a natural transition. I knew it was important to document what was happening [in the children’s lives]."

It was then that Briski asked her then-boyfriend Kauffman (the pair have since broken up) to assist her.

"Zana asked me if I wanted to make a film but I had been an editor for a long time and I had seen a lot of filmmakers do this – spend years and years of their lives working on something and it not getting seen," Kauffman explains. "So I basically told her ‘No, I am not ready to do that with my life.’

"But she was very sneaky and tenacious and she bought two video cameras – one for me and one for her," says Kauffman. "And then she sent back four tapes for my ‘critique.’ Within the first 10 minutes of the first tape I knew I was going to Calcutta. I was there about three weeks later."

Getting the women’s permission to film their children, however, was a difficult endeavor.

"It was incredibly difficult [to get their permission]. It really took me a couple of years to get access," Briski says. "Even when I had access, living in the brothel and knowing the people, there were always times when I was aware that I couldn’t shoot. There were plenty of times where there were fights, or a suicide, or a murder, and you know there’s a person there that doesn’t want their photo taken."

Financial difficulties also proved to be problematical for the duo.

"The financial pressure was really a pain in the ass," Briski says. "If I could have taken that out, it would have been an awful lot easier. On top of living in a brothel, trying to help the kids [and] getting sick, staying up until 4 in the morning filling out grant applications was something I really could have done without."

However the two survived, and after a year of editing 170 hours worth of footage the pair went to the Sundance Film Festival, and THINKfilm, in association with HBO/Cinemax Documentary Films, bought Brothels. In addition to their success, Kauffman and Briski will soon hear if they’ve made it from the Oscar documentary short list to the list of official nominees.

Briski’s experience has inspired her set up a foundation for the children in the film called Kids With Cameras.

"The purpose of the foundation is to do two things: one is to support the kids’ education, on a case-by-case basis," explains Briski. "The other thing is to send other photographers out into the world; to teach kids photography and to do their own work."

Born Into Brothels is currently in theaters.

Interviews
Maleficent doubts her fitness as a mother. So did Angelina Jolie
906 views