2008 NBA Playoff Preview: What Could Happen, Should Happen and Will Happen 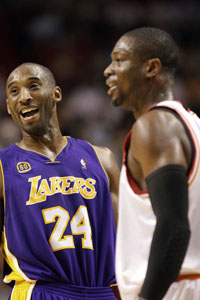 Being that this article is being written during the most competitive playoff race we’ve ever seen out West, early predictions are few and far between. Most experts aren’t even sure where the Lakers, Spurs, Suns or Hornets will end up being seeded, much less who they’ll be playing.

What we do know is we’re in for a great summer of professional basketball and an exciting end to a spectacular season. With that said, here is what could happen, what should happen and what will happen during this year’s NBA Playoffs.

Don’t be surprised if teams like Dallas and Phoenix are seeded lower than expected, and certainly don’t be surprised if they make big runs from their humble beginnings. This is the year of parity, and when the top six seeds are separated by only three games, anything can happen.

The Suns will look to avoid having to play the Lakers in the first two rounds, as Los Angeles is hoping to exact revenge for last year by using stars Pau Gasol and Kobe Bryant to outscore and outshine the new-look Suns, now with Shaq O’Neal. If the Suns happen to end up with the six seed and play an injured San Antonio and then New Orleans, they could have a favorable road to this year’s Western Conference Finals.

New Orleans is too inexperienced, Houston is too beat up, the Jazz too inconsistent on the road and Dallas hasn’t figured out how to incorporate Jason Kidd yet. Look for the Lakers and Spurs series, a possible second round match up, to be the hardest fought of the season.

Both teams have solid stars and deep benches. The advantage goes to the home team, likely the Lakers. However, if the team from Texas can put Father Time on hold for the playoffs and fix the ailing health issues that have even coach Popovich looking towards next season, they could make another great run to their fifth championship in 10 years, probably their last great chance.

In the East, the Pistons and Celtics should have no problem taking down teams like Atlanta and Toronto en route to a meeting for a spot in the finals. Still, the defending East champions from Cleveland and the streaky Orlando Magic might have something to say about that, boasting arguably the two best young NBA talents in recent memory with Lebron James and Dwight Howard, respectively. Neither has the surrounding talent to make it all the way to the title, but they’ll put up a good fight.

The East’s best chance lies in the hands of the talented and experienced Detroit Pistons, who are looking at their sixth Eastern Conference Finals in as many years.

While any scenario has a possibility of playing out, it’s hard to determine who would be favored in two strong Conference match-ups. A Lakers vs. Suns series would be very close – with home games, defense and rebounding making the major difference.

In the East, an experienced Pistons team, with a deep, young bench, should have the edge over a Boston squad with only three real threats, the “Boston Three Party” stars Kevin Garnett, Ray Allen and Paul Pierce. With two of the top defenses though, this series looks to be a seven game fight to the finish.

The dream match-up for L.A. fans and the NBA alike would be a modern-day throw back to the famous Lakers vs. Celtics series of the 1980s.

With superstars Bryant and Garnett refueling the fire, a match up between the two most decorated franchises, with 31 titles between them, would be a series not to be missed. The edge in this possible series would go to the Los Angeles Lakers, whose top talent, deep bench and strong offense would match up well against the Celtics.

The truth is that even though any prediction made now might be completely irrelevant by the time we make it to the second round, odds are it will all be entertaining. Enjoy.