NHL Hockey Playoff Picks: Who's Going Head to Head, and Who's Coming Out Ahead 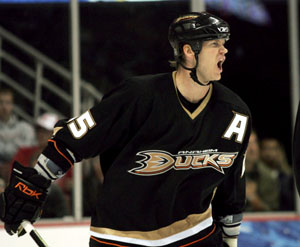 Detroit clinched home ice throughout the playoffs with 115 points. Chris Osgood was exceptional minding the net (2.09 GAA), and Henrik Zetterberg scored 43 goals on the other side. The Wings also have Dominik Hasek in goal.

Yet the Predators can keep up with Detroit. While no player stands out individually on offense, Nashville has the speed to keep up with the Red Wings and two goaltenders (Dan Ellis and Chris Mason) that are just as tough as Osgood and Hasek.

Calgary has Miikka Kiprusoff (2.69 GAA) and Curtis Joseph (2.55 GAA). Though, the Flames love the underdog role.

The great thing about winning strong in the regular season is that momentum often carries into the playoffs. The Wild were 6-2-2 in the final 10 games of the regular season. That’s bad news for the experienced, yet old, Avalanche.

Everything is coming together down the stretch for the Ducks. Chris Pronger returned from his suspension, and Teemu Selanne re-signed with enough time to get re-acclimated. Goaltending is solid for the Ducks, which is important in April and May.

Dallas is bogged down by the flu and will struggle against the physical Ducks.

Boston faced Montreal eight times in the regular season – and lost all eight times. In those games, Montreal outscored Boston 39-16.

Montreal won seven of its final eight games, including two against the Bruins.

The Canadiens are getting healthier this week, too.

The Ottawa Senators backed into the playoffs losing six of their last 10. Pittsburgh must work on their power play to take advantage of their playoff position.

Alexander Ovechkin led the Capitals (94 points) to seven consecutive victories, 11 in their final 12 and a division title (hence a better seed than the Flyers, who had 95 points).

The Flyers have momentum, too – winning seven of their last nine and preventing rival Penguins from clinching the Eastern Conference.

Both teams faced each other in the season finale, but since the game ended in overtime, the Devils maintained home ice. That could prove to be the difference in an otherwise brutal playoff match-up.