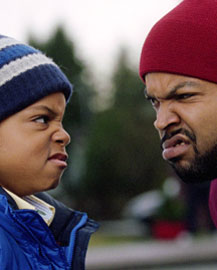 If "Sesame Street" has taught us nothing else (other than the alphabet and counting), it’s that children’s entertainment can appeal to adults as well. Considering the tremendous success of Shrek 2 and The Incredibles, one would think that producers would market "family films" and not just films aimed at the pre-PG-13 crowd. One would think. But with Are We There Yet?, released Jan. 21, Hollywood has released another feature that may win over kids but unfortunately may alienate their parents.

"24 hours. 350 miles. His girlfriend’s kids. What could possibly go wrong?" With Ice Cube in charge of two precocious brats, the answer is that everything could go wrong – but nothing more so than the unbelievable plot.

Even children who had A.D.D. (myself included) will agree that some of the kids’ more disgusting behavior – driving a car around a gas station, pretending to be kidnapped, getting on a moving train – is not "silly," but instead just unbelievably stupid. And maybe it’s just me, but I’ve gotten to the point where I don’t find kids with attitude funny, I find them incredibly annoying and in need of strict, Dr. Phil-on-steroids parenting.

When children are mean to the adult to the point of un-likeability, it’s not enough that it keeps the kids in the audience guffawing. Kids laugh at anything. By the time Cube gets into a kickboxing match with a clearly animatronic deer while the bratty kids take pictures, I wanted to kickbox them myself. Then Cube’s brand new Escalade is set on fire and explodes. But, oh, no problem, it’s just a material possession.

It’s just not realistic. When that other genius Hughes (John) did kids, they acted like kids and inhabited a realistic world that parents could relate to. "Oh no, we left Macaulay at home!" from Hughes’s Home Alone is a simultaneous fear of every parent and fantasy of every child. In other words, it appeals to everyone. Are We There Yet? just appeals to kids – and that’s a big just.

Are We There Yet? is currently in theaters.