Deal, the Movie: How One Director Deals With His Addiction 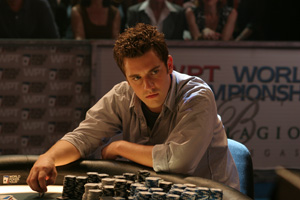 Everyone knows the dangers of growing up in the Hollywood spotlight. There is too much sex, drugs and rock ’n’ roll for the average Joe to handle.

It’s known as a dangerous place to raise children and almost impossible to keep a marriage. So what is a boy to do when he comes from a family of models, actors, producers and directors?

“I grew up in the entertainment business,” Cates says. “I knew I wanted to be a director one day, but didn’t think it was something I’d do right away.”

Cates took the “high road” and graduated from Syracuse as a theater major. But it wasn’t long until he was back in the limelight trying to catch his big break.

“I gambled on sports while I was waiting for auditions,” Cates says. “It became an expensive hobby, and then an obsession.”

After losing thousands of dollars and finally getting help, Cates quit gambling and learned to deal with his addiction in a most creative way. In 2000, he wrote and directed a movie called Spent. The film, based on Cates’s personal story, follows a few days in the lives of Los Angeles 20-somethings who are searching for fame while drowning in their own addictions.

“Writing the movie was incredibly therapeutic,” Cates says. “I haven’t bet since.”

Unable to leave the subject matter behind, Cates is now following Spent up with another movie. He recently wrote and directed a movie called Deal, starring Burt Reynolds, Bret Harrison and Shannon Elizabeth.

Deal is about an ex-gambler who teaches a hotshot college student how to really play. After the two have a bitter falling out, the mentor and student find themselves competing against each other in the World Series of Poker.

“The film’s metaphor is that it’s not about the cards you’re dealt; it’s how you deal with them,” Cates says.

Cates is passionate about making movies that involve real people in real situations. His goal is to create characters that anyone can relate to.

Yet these ordinary people are played by some extraordinary faces. Cates has worked with big time stars like Reynolds, Sarah Jessica Parker and Morgan Freeman.

“The best moment of my career was when Morgan Freemen agreed to work with us,” Cates says. “It was an amazing moment. I put my hands up and thought to myself, ‘the gods have spoken.’”

But the ride doesn’t stop here for Cates. He hopes to have a family and kids some day, but until then, he plans to keep making movies.

“I’m 100-percent satisfied,” Cates says. “There are times when you get frustrated growing up in the business, but I had realistic dreams about how long it would take for me to get here.”