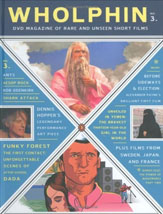 Throw out your Book of the Month club and start subscribing to Wholphin, a DVD magazine specializing in rare and unseen short films. Named after the elusive yet proven existence of whale-dolphin offspring, the quarterly publication proves that just because you’ve never seen something doesn’t mean it’s not out there.

In just two years, Wholphin has presented everything from Iranian cartoons to Spike Jonze’s Al Gore documentary and is in the works for crazier (think “Elliott Smith as a Rastafarian basketball player, with a cameo by Bette Midler,” according to Editor Brett Hoff). This issue, however, is so amazing that Cinefamily is hosting an extravaganza in honor of Wholphin #6, where the faux A Clockwork Orange prequel, Australian TV docu-comedy, Academy Award©-nominated animated short and documentary about Chinese third-graders who hold a democratic election for Hall Monitor and inadvertently mimic 200 years of American history (the kid who bribes his class wins) can finally be shown on a big screen.

This installment of hard-to-find shorts won’t be in subscribers’ mailboxes until the end of summer, so wind your way into the world of contemporary short filmmaking at the Silent Movie Theatre, then sign up for Wholphin, because it’s not YouTube.