Harold & Kumar Escape From Guantanamo Bay: Laughing All the Way to the Joint 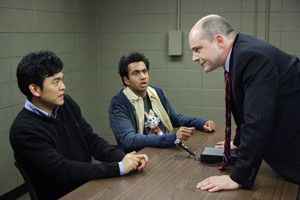 What do you get when you add an airplane, a scared old lady, two stoners, a homemade bong and a one-way trip to Guantanamo Bay? Answer: the hilarious adventure that is Harold & Kumar Escape from Guantanamo Bay.

The follow-up to the 2004 hit comedy Harold & Kumar Go to White Castle starts off right where we left it. Harold and Kumar are recovering from their crazy quest for White Castle and are preparing for their trip to Amsterdam so that Harold can pursue his dream woman. This, of course, goes awry, and we get taken along Harold and Kumar’s journey across the country in an attempt to clear their names.

“We don’t really enjoy comedies that don’t have a story that you’re invested in,” explains co-writer/director Jon Hurwitz.

Co-writer/director Hayden Schlossberg agrees: “In our writing, we write characters that are from our own world. So there’s a truth in the characters.”

One character fans will be happy to see returning is the infamous Neil Patrick Harris, or NPH. He returns as the constant partying version of himself and delivers just as many laughs as in the first film.

“It’s intriguing because my real life is relatively tame,” Harris says. “I didn’t want to be agreeing to a movie and find out in turn I was making fun of myself. I didn’t want to disrespect my previous roles, but I wasn’t, and it was great.”

Schlossberg complements Harris’ sentiment: “We hated the idea of having a celebrity cameo where the joke is on the celebrity, ’cause that’s not really that funny to us. With Neil Patrick Harris, he informs the story - it allows him to play a character doing all sorts of crazy things that you wouldn’t expect to have him do.”

In the film, Rob Corddry plays a hard-headed Homeland Security agent who goes after Harold and Kumar.

“There’s definitely, at least in his lilt, something of George Bush,” reveals Corddry. “Like, George Bush is from Connecticut, but he talks with a Texas swagger. So I’m sure this guy is probably from New Hampshire, yet he’s got a little cowboy in him.”

Coddry’s character steals the show with his completely outward racism, which makes his performance one of the funniest in the movie.

“This movie is not racist, therefore, my character can be as racist as we can possibly conceive of,” Corddry says, adding, “It’s fun to be able to have permission to be as horrible as you possibly can.”

This film, like the first, deals with many racial stereotypes, especially with Corddry’s character thrown into the mix.

“If you have to put your buck teeth on and ching chong an accent, it’s a deeply scarring experience, and I don’t think it’s worth the money to do it,” explains John Cho about his thoughts on being an Asian-American actor working in Hollywood. “So I consider it easier to say no [to those roles].”

Regarding the characters of Harold and Kumar, Cho says, “It’s the classic odd couple pairing. Harold is more straight-laced. He’s very concerned about consequences, and Kumar is willing to do anything and doesn’t care about what happens next.”

Cho has experienced much success since his starring role in the first film. Currently, he’s finishing up work on the latest Star Trek film.

“I’m doing pretty well, and I don’t have any complaints about where my life is,” he tells. “There’s a reason I’ve taken every role. There’s always something that attracts me or seems fun. If I’m not excited by it, I’ll probably do a bad job, and then I’ll ruin my career.”