In The Realms Of The Unreal: (Wellspring) 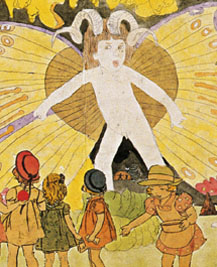 In 1973, an 82-year-old ex-janitor named Henry Darger entered a retirement/poor house in Chicago. His only acquaintances were his rooming house neighbors and landlords, none of whom knew much about him, except that he sometimes murmured odd remarks, spoke in strange voices while shut away in his room, and attended Catholic Mass as often as five times a day.

Upon entering Darger’s cramped apartment, his landlady Kiyoko Lerner made a startling discovery. The room was heaped with the yellowed manuscript of Darger’s 15,000 page novel – In the Realms of the Unreal – and over 300 watercolors, some 10-feet long. Darger died soon after the discovery, while his enterprising landlady went on to exhibit his work all over the world.

Jessica Yu’s documentary about Darger is a portrait of a man through his own intimate works. Little is known about his childhood, except that he was born poor and orphaned early. Darger went to a boy’s home and then to a home for feeble-minded children. He then escaped and worked as a janitor at Catholic Hospitals for the rest of his life, except for a brief stint in the army during World War I.

His writings and paintings are largely about the Vivian Sisters, prepubescent girls at war with the Glandelinians, grown men who resemble confederate soldiers, and those who enslave children. The paintings depict battles, pastoral scenes and hideous scenes of child-torture and evisceration. The children are for the most part hermaphrodites – naked little girls with tiny penises. The style of the art is taken from late 19th century children’s illustrations, which feature cute, rosy cheeked toddlers. It’s Americana at its best – or worst, depending on your point of view.

The film uses animation effects to bring life to the paintings, however this confusing technique seems to diminish their impact. Darger’s intentions also are not analyzed closely, with the feeling that filmmaker feared portraying him as a sort of Jeffrey Dahmer of art.

But Darger’s work does – despite its absolutely puerile subject matter – emit strong emotions. Was he at war with reality, God, or a childhood trauma? Though the film never ponders these questions, Darger remains a fascinating subject for exploration.

In the Realms of the Unreal is currently in limited release.