Then She Found Me: (THINKFilm) 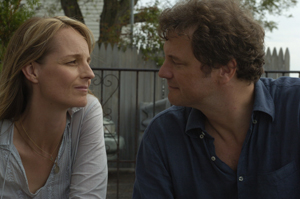 In Helen Hunt’s directorial feature film debut she plays April, a 39-year-old woman going through a midlife crisis of sorts. Craving motherhood, her dippy choice for a husband (Matthew Broderick) is ditching her, and her adopted mother has died. She is left stunned and confused.

She quickly becomes involved with Frank (Colin Firth), whose over-exuberance makes it clear that he’s very interested in her, plus her birth mother (Bette Midler) pops onto the scene claiming that April’s birth father is Steve McQueen. That’s when she really looses her grip on the reins of her life.

Firth is charming as the love interest, and Midler is quite funny, though she doesn’t bring anything new to a character she has played many times before. Hunt plays her part a little too seriously, turning the production into a dramedy more than a comedy.

To her credit, she does a fantastic job as a director. She infuses great style into the film. Bigger stars have done much worse. You would never guess it was her first time out.

Though the predictable story is hardly groundbreaking, Then She Found Me is often funny and somewhat endearing.

Then She Found Me releases in select theaters April 25.