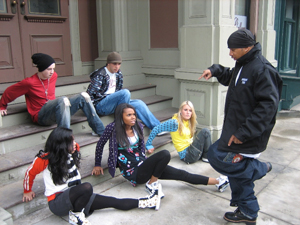 As a judge on MTV’s addictive and often mesmerizing “America’s Best Dance Crew,” Shane Sparks helps to bring little known hip-hop dance crews into the spotlight, something that Sparks, as a former member of a dance crew himself, is proud to do.

Sparks does not remember the first time he started dancing, nor does he remember exactly what inspired him to dance, but he does remember always dancing.

“My mother would say, ‘Dance for your uncle. Dance for your family.’ And I would just stand right there on the floor and dance,” remembers Sparks.

In the years that followed he never stopped dancing, and in high school, every weekend in Cincinnati, Ohio, he would meet with his crew and hit the clubs. At that time, dancing was pure. It wasn’t a way to make money or win awards, or even get a TV gig. The satisfaction came at the end of the night, after proving their crew was on top.

“It was a respect thing. We came out of there feeling like kings because we knew we were the best,” he says.

After high school, Sparks’ crew knew they needed to find a way to make money, because dancing at the time was not a feasible way to pay the bills. The crew morphed into a singing group, Cold Premiere, and was signed to Giant Records and flown out to Los Angeles.

But the group eventually disbanded, leaving Sparks alone in Los Angeles with nothing to do but go back to his calling – dance. While trying to get by in the City of Angels, a friend introduced Sparks to a dance studio, a foreign place for this self-trained dancer.

“Growing up at home, they didn’t teach hip-hop. It’s like, ‘how do you teach hip-hop?’ And it was weird because at home we didn’t call it hip-hop. It was busting or dancing or grooving or street dancing.”

It was during this time that Sparks, in an astute career move, realized the potential in choreography, something he hadn’t considered previously. Sparks now has an impressive resume as a choreographer: “So You Think You Can Dance,” You Got Served, and of course he’s worked with groups and performers like *NSYNC, Omarion, B2K, Marques Houston and Disney’s Corbin Bleu.

But don’t ask Sparks to describe his dance style. Probably because there are no genres of dance that he tries to stick to.

“I’m just doing whatever comes out of my head when I hear the music,” he relays, whether that’s hip-hop meets lyrical or jazz meets interpretive dance.

Sparks returns to season two of “America’s Best Dance Crew” in June, and in doing so, helps further the popularity of his calling. And of course, he’ll always keep moving.