Sasha and John Digweed: Bounce Back with a Coachella Appearance and Club Tour 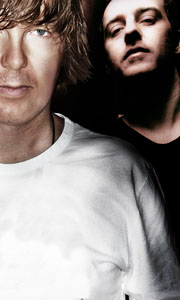 With the electronic and dance scene now at the pinnacle of its popularity since its heyday in the late ’90s, two legends have arisen from a six-year slumber to dominate the genre that’s rightfully theirs. Since wowing the United States in 2002 with their groundbreaking Delta Heavy Tour, Sasha and John Digweed have kept a low profile within North America, playing a handful of exclusive one-off club shows that, for the most part, went unnoticed.

Now with a surprisingly dance-heavy Coachella lineup quickly approaching, the prodigious pair is blasting through the greater North American region in top gear on their much-anticipated Spring Club Tour, hitting major U.S. cities, as well as Canada and Mexico, and ending with a headlining Coachella slot on the festival’s second night.

“We did so many things wrong with that tour,” says Sasha of the Delta Heavy Tour. “We were rookies. We spent too much on the production.”

Though not a complete failure, Sasha does acknowledge the flaws of their infamous Delta Tour, mistakes that have influenced their current tour.

“Once we decided it was a good thing to do, it took a couple of years [to do it] after mentioning it,” said Sasha of the initial planning stages of the Spring Club Tour. “We thought, ‘Let’s do it proper this time and get it organized properly.’”

Stripping back the production of the prior tour, the DJ duo is now focusing its sights on more intimate venues rather than arenas.

Much has changed in the last six years since Sasha and John Digweed toured the United States. For one, Americans are showing a growing attraction to electronic and dance music, much of which stems from a handful of milestone events thanks to a few Frenchies: Justice and Daft Punk.

Strangely enough, these two single-handedly put French house and electronic/dance music back on the map after some slow years. Justice saw a MTV video of the year nomination for their breakthrough hit “D.A.N.C.E.” But it was the godfathers of French house, Daft Punk that put the land of berets and crêpes in the forefront of electronic music.

Daft Punk accomplished a laundry list of momentous feats, namely: the aforementioned Alive 2007 Tour and the eponymous accompanying live album, a collaboration with Kanye West on “Stronger” and the duo’s premiere at the 2008 Grammy Awards.

Regardless of the major events that have led to such an influx of electronic fans, Sasha still agrees that the genre has yet to make a major impression on the American music market.

“I don’t think dance music has gone mainstream in the United States,” he says. “I think everyone thought dance music was going to become one of the main genres [in the United States]. The main problem with the American market is that the charts move so slowly. Every weekend we change our sets [in Europe]. The crowds are hungry for new sounds. By the time that the records could make it to the top charts [in the United Stats], people will get tired of it. I think the American market is very hard to crack in terms of the mainstream.”

Still, Sasha offers that dance music is in its rightful place.

“Dance music doesn’t belong in the mainstream,” he states. “It’s where it belongs, in the underground. Electronic music doesn’t have a U2 or a Rolling Stones. I’m quite happy with it where it’s at.”