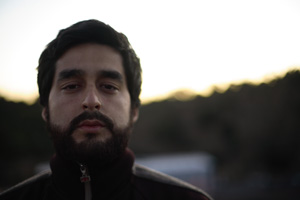 To put it simply, ArtDontSleep is wide awake. People might sleep but creativity never does. Art don’t sleep. Art wakes people up.

Through revolution and tradition, that is exactly what 26-year-old ArtDontSleep promoter Andrew Lojero has been putting down for Los Angeles to get up to. Behind the city he calls the Mecca of Creativity and channeling the mysterious spirits of its artist inhabitants, Lojero has created a series of events that showcase the love, joy and community he finds these souls to be the messengers of, hoping to share their part of the greatest city he’s ever known – Los Angeles.

Beginning in 2004, Lojero first played partner, programmer and curator to local gallery, Frecuencia Modulada. Now a clothing line, back then it was the important stepping stone to Dru’s role as the gifted promoter he’s become today.

Collaborating with graffiti artists and connecting with innovative DJs, Lojero found his own voice in orchestrating the events that brought these groups together. He realized that by igniting a few, he might inspire the masses. Enthrall people with the joy of life and the visceral experience that art brings, and maybe you can change the world.

Of the younger audience just beginning to discover his events, Lojero sees them as the individuals at the edge of understanding the abstract. Out on their new adventures, they’re beginning to enjoy live moments that really excite them, moments they can connect to and participate in – not just an event they watch for an hour and go home minutes after.

One could easily say ArtDontSleep shows have an audience as creative as their performers – as Lojero calls them, “Grown and sexy,” – and all sharing in the gift of inspiration. Lojero’s intent is to give the audience a place to deepen their discovery, to further enjoy and respect what they’re learning about. He hopes they’ll walk away feeling alive.

ArtDontSleep also produced the ’07 release, From L.A. With Love, a collection of unreleased tracks from the underground and progressive movement of Los Angeles’ finest in the music scene with accompanying design by the city’s finest in graphic arts. It’s just another collaborative effort between art and sound for Lojero and ArtDontSleep.

A few years ago there were parties and weekly clubs with great talented DJs and supportive followings. But there were many different groups, and they rarely came together. Perhaps the one accomplishment of ArtDontSleep has been bringing these groups together, creating more community and vitality in Los Angeles’ art and music scenes.

ArtDontSleep hopes this unity is taking what Los Angeles has and making it even stronger, enriching the soil of the creative Mecca that it already is. But of all his work and of all of Lojero’s accomplishments, he only hopes to help and teach us all. He only wants to keep us growing so that Los Angeles may always be able to thrive, and we all might be able to stay in a vibrant state of gifted and artistic knowing.

Interviews
Searching for hope? Kacey Musgraves’ ‘Rainbow’ is a psalm, and balm, for the pandemic era
629 views

Interviews
You might think, ‘Who asked Dashboard Confessional to come back?’ Chris Carrabba has some answers
657 views

Interviews
Billie Eilish isn’t stressing over the Grammys. She’s busy worrying about the end of the world
1,154 views

Interviews
With new fans aboard, Korn shows how to metal in middle age
1,062 views