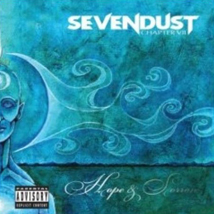 This one doesn’t need a lot of deep interpretation; the album title nicely sums up what’s going on here. The reflections of hope and sorrow begin on the upbeat side with “Inside,” where singer Lajon Witherspoon extols his listeners to turn inward for answers to life’s tough questions.

Witherspoon has a bit more soul in his voice than most of the singers working in the modern hard rock scene and therefore, he doesn’t have to rely on screaming constantly to make his point, though he does sound good when he briefly crosses into that realm on songs like “Enough.”

Mark Tremonti of Alter Bridge joins the band for one of the title songs, “Hope,” and oddly enough Tremonti’s partner in Alter Bridge, Miles Kennedy, joins in for the opposite viewpoint on “Sorrow.” Both songs are performed at a slower pace, and both hold equal amounts of angst.

In fact, the album demonstrates that hope and sorrow are not exactly two separate things; they are inseparable components of something much bigger than its parts. Longtime Sevendust fan Chris Daughtry adds guest vocals on “The Past.”