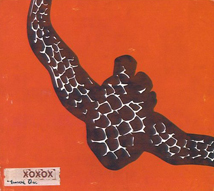 Trances Arc send hugs and kisses on their latest release, but don’t get too comfortable the CD cover graphic features a drawing of a snake that’s swollen with something it’s swallowed – apparently that most important part of the human anatomy, the heart. No wonder then that singer Eric Toledo proudly proclaims his independence on XOXOX’s opener, “New Style.”

Toledo has a tremulous quality to his singing style that he can switch on and off with ease, an effect that works especially well on songs like “Birds Collide.” Toledo plays keys throughout, including piano on a nice vocal showcase called “Cold Drivers”, but this album is driven by the guitar work of Michael Dorio and Jay Propst and sequenced so that the deeper into the album you get the harder the sound is.