MiLO: Living the Art of Metamorphosis 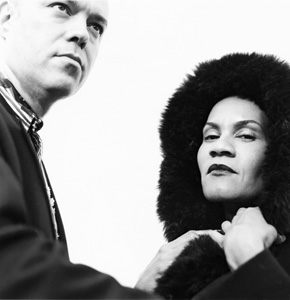 MiLO is something of an anomaly here in Los Angeles. First, they utterly defy classification, treading only lightly in the territory of their influences, which range from Radiohead to Massive Attack, and drawing from an extensive background in classical music. They exude a kind of professionalism that alone might be off-putting, yet manage to maintain a certain artistry that keeps them fresh and exciting enough to draw in just about anyone.

Based around the songwriting duo of Mik Sandgren and Lola Gayle, MiLO dance about their engaging melodies, complimenting them, allowing them to soar without becoming overbearing and losing the beauty of a well-constructed song. They’re joined by Charlie Campagna, Sandgren’s long time acquaintance on guitar and cello, Derek Whitacre on laptop duties, Thomas Schobel on drums and Cees Van Der Linden, Gayle’s ex-husband, on bass.

Now it might seem odd to mention that last detail, the ex-husband bit, but you see, Sandgren and Gayle are now married, making MiLO something of a family affair. In fact, the name MiLO itself is derived from the marriage of Sandgren and Gayle’s surnames.

There’s also an international element that flavors their sound, with Sandgren hailing from Sweden, Schobel from Austria and Van Der Linden a native of Holland.

In their downtown L.A. loft, fittingly overlooking the paradox of a beautiful park and the dinginess that’s characteristic of the city, MiLO attempt to describe their sound in their own terms.

“The last three years have been [about] us finding our voice,” says Gayle. “We heard in our head what we wanted it to sound like but [were] not really sure how to get there. We did some photos with Jessica Shokrian, and there were some great images making things look dirty and pretty at the same time, and we started to discover, yeah! Dirty-pretty! Making pretty melodies and then making it super dirty but not blowing it out completely.”

Overall it’s been a process, a kind of emerging from the cocoon, so to speak. With all of their musical expertise, one might think it would be easy.

As Sandgren puts it, “Finding the sound and having the arrangements emotionally underscore what the song is trying to do, that’s the real trick. Living in L.A. and doing music you acquire a lot of skills, and you learn how to do this style and you learn how to do that and after a while, it’s kind of a risk that you lose yourself. So this year has been really good to just focus.”

MiLO has also discovered that it’s not necessarily blasphemy to write a good pop song.

“Pop is like a threat to people. People are afraid of it. It’s like a curse word, and you’re not allowed to say it,” Gayle says.

Sandgren recalls, “People that we think are groundbreaking, like Kraftwerk, their goal was to write the ultimate pop song. They weren’t ashamed about it, they were like, ‘This is what we want to do. And by the way, our sound is like nothing you’ve ever heard before, but we’re gonna write pop songs.’ So that’s kind of where we’re at with that.”

It’s been an especially trying journey for Gayle who fought, after years of classical music training, to find her own voice. Yet now, live onstage, she’s this Amazon woman, lost in the rhythms and bobbing about as if propelled by a force unseen, unleashing upon her audience a voice reminiscent of Billie Holiday, full of gritty blues. With singers like Amy Winehouse rising to the forefront of the music industry, it’s obviously a welcome shift.