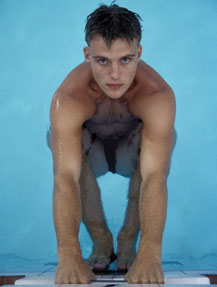 Jesse Spencer might not have known what he was getting into when he signed on for Swimming Upstream, the new film from Russell Mulcahy (3: The Dale Earnhardt Story, Ricochet). Much of the film, a true story about the great Australian swimmer Tony Fingleton, was shot in a pool.

Naturally, the production required a good swimmer for the part – specifically one who could do the backstroke – a stroke that Spencer didn’t have a clue to do at first. As a result, Spencer trained for weeks, which required an early morning, 5 a.m. splash in the pool.

At times, Spencer got so winded from the training that he cramped up and vomited. But if any of this bothered him, it’s difficult to tell from the way he smiles while speaking about the filming of Swimming Upstream.

One of the stars of TV’s "House," Spencer is a native Australian, and says he remembers hearing about Fingleton, the champion swimmer in which the story was based. "The real story added genuine weight," he says.

The film takes place over the course of about 20 years, when Fingleton went from playing piano in his home to swimming in meets throughout Australia. His up and mostly down relationship with his alcoholic father, who was also his coach, is the core of the film.

Before production, Spencer says he could do the freestyle stroke well enough, but had trouble with the stroke that Fingleton mastered.

"The backstroke was hellish. I’ve done lots of freestyle," says Spencer, "[but] I hated the backstroke. It’s not natural. The hardest thing was the kicking; I got cramps, but I had to try to love it. In the end, I did enjoy it."

Spencer says his preparation was an important part of playing this part. "It was good for the Tony character because that was his home – the pool," he says. "When there were problems, he went there; it was his home away from home. It was all part of being really involved in that whole world. It was really important to get in the pool. Everything else goes from there."

Once production started, Spencer found himself acting alongside Oscar-winning actor Geoffrey Rush, who plays his father, Harold. Rush recently won a Golden Globe for his portrayal of the title character in The Life and Death of Peter Sellers. Spencer could have been overwhelmed, but he says Rush made it easy.

"It was great, it was a really collaborative effort," Spencer remembers. "He was really involved."

Geoffrey Rush had close ties to the story as well, as he was raised in Brisbane, Australia, where the film is set.

"It’s indicative of a very particular part of Australian history," says Rush. "Harold is very much of that generation. He lived through two World Wars and the Depression. I can remember the feelings of people in their 50s in that period. They were very silent."

Aside from the help of "powerhouse actor" Rush, as Spencer calls him, there were other people on the set who lent a hand. One crucial person involved was Tony Fingleton himself. Another was Spencer’s trainer, who coincidentally, was on a swim team with Fingleton.

Spencer could have been overwhelmed by the presence of the person he was trying to portray, but he said it only added to his performance. "Tony gave us insight into the characters," he says.

Spencer adds that his experience with Upstream increased his awe of Fingleton and others like him who dedicate themselves to their sport. "It’s incredible what athletes go through," he says. "I have lots of admiration for them."