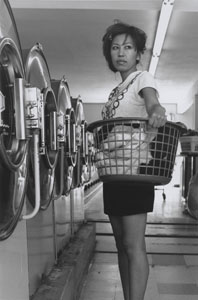 A single photo can show so much, whether it is a story within the image or a story of the photographer who took it. Behind the photos in the upcoming emerging (I) 3 exhibition, four vastly different Los Angeles City College photography students tell their stories.

Yamin Li has what could be considered the most traditional story. Having moved here from China in 2003, she started to take photography classes in 2007.

“I always liked photography,” says Li. “It was my first choice for a major.”

Her interest in photography moves beyond the plain and superficial, though.

“I like to make up stories for each picture,” Li states.

Cheryl Aguba, on the other hand, didn’t obtain her first choice in major. Having majored in Business, Aguba eventually realized that she wasn’t really happy with it.

“I felt that [majoring in Business] was what my parents wanted of me,” Aguba suggests. “Because it was practical.”

After working for a while, Aguba settled in California to get a real estate license, simultaneously taking photography classes on the side as a hobby. However, once she started working in real estate, she found that it wasn’t fulfilling.

“It just wasn’t right for me,” asserts Aguba.

So, she decided to pursue photography at the age of 30, and hasn’t looked back since.

Fridgeir Helgason is the oldest of the students. Currently 41-years-old, Helgason was born in Iceland and moved to the states in the ’90s, working in New Orleans as a chef. After 14 years there, he made his way to Los Angeles, where he found himself homeless for a brief period of time.

Eventually, he entered film school to study Cinematography. As a part of his studies, he had to take photography classes.

“That’s when I knew,” Helgason states, “that I found my niche.”

Switching to Photography, he devoted much of his time to it.

“My driving force is just to be incredibly good at it,” claims Helgason.

Having went back to Iceland for a short while before coming back to Los Angeles, Helgason found some trouble readjusting to Los Angeles’s drag light, turning to night photos instead.

“The way I shoot,” Helgason outlines, “is almost a homage to Iceland.”

It is Vania Castellaw, though, who has one of the most fascinating stories. She ran away when she was young, became addicted to drugs and was homeless for a while. She sought rehab when she was 18.

“I was pretty much dying,” Castellaw states. “I realized I was either gonna die or try.

“Art has been a part of my life since I was young,” she continues. “It really spoke to me. Photography can capture a moment and freeze it.”

Now 21, Castellaw understands that her experiences have opened her up to things that most people haven’t seen, often featuring homeless people in her photography.

“[My experiences] really make me appreciate the beauty in everything,” says Castellaw.

Despite their incredibly varied backgrounds, photography has brought these four students together in an exhibition that reveals their past, present and future.

emerging (I) 3 will be on display April 24-June 25 at the Creative Center for Photography located at 5124 Sunset Blvd., Hollywood, and is free to the public. For more information, visit www.freestylephoto.biz.