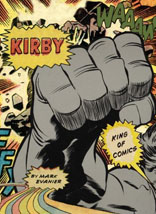 It wasn’t at all uncommon for Jack Kirby to look out his kitchen window after a full night of drawing and see hippies asleep on his front lawn. The kids, upon finding out he had moved from New York to Thousand Oaks, had begun flocking there, in a kind of pilgrimage, with the hope of gaining enlightenment from the man who had drawn Thor, the Silver Surfer and Galactus.

Kirby would go down the street and bring back Happy Meals for them. He wasn’t a talker.

Stan Lee was the talker — the charmer, the raconteur, the guy who sounded like a Marvel Comic Book. But Kirby would have appreciated their showing up, would have been genuinely touched by their adulation. And then he might have wished them well, gotten a fresh cup of coffee from his wife and gone back to work.

Mark Evanier’s Kirby: King of Comics – a collection of stories, a collection of drawings and, in its own way, a tribute to an old friend – is a book Kirby himself would have read with pleasure. Gerard Jones’ Men of Tomorrow captures the early days with style. Ronin Ro’s Tales to Astonish (where one can read more about Kirby and the counterculture) delineates the shabby treatment Kirby received from Marvel Comics.

But Evanier’s book, as heavy as Captain America’s shield, is the one Kirby would have opened with delight. Even the smell: the smell of ink and old comic book pages, as one goes from one extraordinary page to another, is exactly what it should be. These things would be irredeemably lost if read on one’s PC instead of like this.

“Nick Fury is how I wish others saw me,” Kirby told a friend. “Ben Grimm [The Thing] is probably closer to the way they do see me.”

Competent as Fury is, he wouldn’t have walked down the street to find hamburgers for a bunch of kids on his lawn. Grimm is the heart and soul of the Fantastic Four. One might say: he makes the difference.

Both Kirby and the Thing were granted awesome abilities, talents denied the rest of us, and neither man was exactly appreciated or understood by management. But when push came to shove, these were the guys you wanted in your corner.