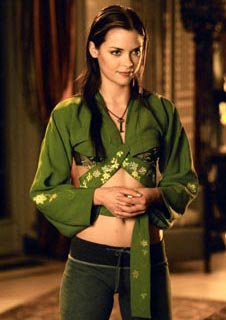 Actress Jaime King doesn’t speak, she bubbles. It’s one of those delightful, giggly voices full of fun and conspiracy that I haven’t heard since a junior-high slumber party. I swear she’s on the verge of daring me to dial a phone number at random and ask if their refrigerator’s running. I’d probably do it, too.

We could be talking about the premiere of her new film Bulletproof Monk co-starring Chow Yun-Fat and Seann William Scott, or two girls gabbing about a Bat Mitzvah after-party. "It was so much fun!" she exclaims. "Everyone I love was there and it was just so huge!"

But behind that comfy personality, is a budding actress who’s already a veteran of show business. At only 24 years old, King’s career could already fill its own hour on E! True Hollywood Story. Discovered ten years ago in her hometown of Omaha, Nebraska, the blonde haired, blue-eyed beauty was whisked to New York where she enjoyed several years as the Next Big Thing in the modeling world. But sunny Jaime King’s story took a dark and all-too common turn when she got hooked on hard drugs. She had quit heroin just three months before her boyfriend, up-and-coming fashion photographer David Sorrenti died of an overdose. Yet unlike many celebrities with addictions, King is not only willing to talk about it, but she’s determined to take responsibility rather than blame the demands of her industry.

"I've tried to think about the roots of why I was a drug addict, and I think I was just young," she told Paper magazine. "I was just one of those kids that loves to experiment, and I think that even if I weren't in fashion I would have been at home getting high because that's the kind of person I am."

Now that King, whose previous credits include Pearl Harbor and Slackers, is focusing on acting it’s time for a change or two. First of all, the name: James to Jaime isn’t sudden at all for King. Her real name is Jaime, prophetically named after the bionic woman, Jaime Summers. She decided to use her boyish nickname when another girl in her modeling agency went by Jaime. "It was really great to see my name up on the screen as ‘Jaime’ and it’s great to hear people say it as I’m going down the press line (on the red carpet)," she says.

And her first starring role has changed her perception of an entire popular genre–the Kung-Fu feature.

"I was never into Kung-Fu movies until I had seen Crouching Tiger, Hidden Dragon. That was the first time I realized how beautiful an action film could really be," she says. "So when I found out about this film, I figured if I was going to do this, Chow Yun-Fat would be a pretty awesome person to do it with."

King proudly says she performed almost all of her own stunts for Monk, a task that required training with the world’s best Chinese masters six to seven hours a day for seven months. Already an amateur athlete (she surfs and runs), King thrived on a steady diet of Kung-Fu, gymnastics and street fighting, but claims working on the wire was her definite favorite.

"I got to run up walls and flip through the air. I literally got to run up the side of a wall, over the ceiling and back down again. It was just so awesome! It was like flying!"

King cheerfully admits there were some drawbacks to such physical work.

"Imagine, you’re doing these moves for 15 hours straight. There were times that my butt was so sore, I couldn’t sit on the toilet to pee," she adds with a big laugh.

For the moment, she’s happy to kick back, enjoy publicizing Monk (opening nationwide on April 16) and take it easy. "I’m just having fun reading scripts. Each film that I take is a very thoughtful process," she says. King, who hasn’t studied acting formally, adds that working with great directors, writers and actors has been an excellent learning process.

"It’s just a blessing," she says a little wistfully. "I get to learn and grow just by the different scripts that I read and the different people I work with. And as I learn more about myself, I can learn about all different kinds of characters."

And she recognizes that her lucrative modeling career has given her freedom to look for challenging characters in less-than-glamorous roles. Her role in 2001’s Blow, for instance, consisted of only one scene, but gave her the opportunity to work with Johnny Depp and Ted Demme.

King says the positive response from Hollywood has been overwhelming. "It’s become such a personal thing. I’m really accessing my vulnerability and putting that out there. And it feels good to get that pat on the back and know that people appreciate what you’re doing."

Jaime King bubbles again as she tells me she will also return briefly to the world of fashion. She recently signed as spokesperson for Revlon, alongside powerful actresses Julianne Moore and Halle Berry. This serious-actress-in-training can’t wait to come back to her home in front of the still camera. "I get to go back into the environment of the photo shoot and work with people that I grew up working with," she says and proudly adds "But this time, it’s as Jaime King, an actress."