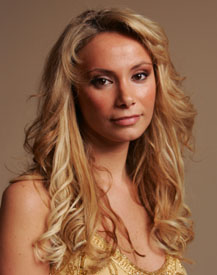 Hour by hour, extension by extension, Irina Ovrutsky, 24, let down her golden hair.

Finally, at about 2 a.m., Ovrutsky looked the part of a modern-day Rapunzel.

Since 7 p.m., Saschah Bianchin, owner of Salon Liv in Chicago, had been heating the tips of hundreds of 18-inch strands, pinching and rolling each between finger and thumb around Ovrutsky’s own shoulder-length tresses, less than an inch from the roots.

The extensions came from Great Lengths International, an Italian company that began turning Hollywood heads – Jennifers Aniston and Lopez and Halle Berry among them – about eight years ago.

Magazines outed a few of them. Now, with momentum from shows such as VH1’s "Fabulous 40," which just named Great Lengths one of "the most incredible items on the planet," other women (and a few men) are taking a page out of the hair fairy tale for themselves.

The amount of Great Lengths hair purchased in the United States increased about 65 percent in 2004, said Brett Butcher, the company’s national program director.

The appeal? Not only are the extensions made of human hair, they also are bonded strand by strand via a keratin protein tip, not in clumps with glue, wax or knots.

"Out of all the hair extensions people put in, they’re the safest, the healthiest and the best – they don’t damage your hair," said Spyros Petros, a Chicago hairstylist who has performed the Great Lengths extensions for years, including on a man with thinning hair in his early 20s just before New Year’s Eve.

"I have clients who’ve been back four or five times," Petros, who works at a Gold Coast salon, said. "Once they have them done, they’re hooked."

Great Lengths procures human hair from India, where temples sell the manes that women sacrifice in prayer, gratitude or when they marry. (The temples use the profits to lodge pilgrims and to help operate charitable programs.)

The "virgin hair" or "temple hair," as it is called, has not been chemically treated, and it blends well with other hair textures. The hair is bundled to keep the cuticles in the same direction to preserve the health and shine.

No bleach is used in either removal of black pigment or in addition of other pigments. The hair soaks for days in gentle dyes, like those used on cashmere, to help the hair retain both its softness and strength.

Salon Liv client Lisa Peiser, 33, splurged on Great Lengths extensions just before her wedding and after about a year of treatment for Hodgkins lymphoma. Since she completed chemotherapy, her hair had regrown to about 3 inches. She wanted an updo for her Florida wedding.

"I’m pretty low maintenance, but my hair didn’t grow in the nicest style," she said. "My hair was straight before I went through chemo. It came back very curly. I was limited to wearing a wig. So I would do the extensions again for the reason I did."

A client’s hair must be at least 3 inches long before the extensions.

After a consultation, the stylist orders hair from Great Lengths, available in more than 45 shades, a variety of textures (the extensions can be permed to match the client’s) and six lengths from 8 inches to 24 inches.

For Ovrutsky, whose natural hair is dark but had been color-treated, Salon Liv staggered two shades of blond and a caramel tone.

"It’s all about placement," Bianchin said as she picked up Ovrutsky’s next new strand, which is composed of about 200 pieces of hair. (Bianchin has Great Lengths extensions in her hair too.)

An executive assistant, Ovrutsky had modeled, but found her bookings dropped when her hair was chopped at another salon about two years ago. A week after her extensions, however, she was back smiling in the mirror at Salon Liv, her tresses freshly curled with a large-barrel iron.

"I love them," Ovrutsky said. "People know something’s different but they don’t know what, which is good. It’s not this crazy fake hair. A guy actually came up to me and said, ‘Oh, I like your haircut!’ I was like, OK, if that’s what you want to call it."

Process: Up to nine hours in the stylist’s chair.

Comparisons: About twice as expensive as some synthetic hair extensions.

Where available: For a list of providers, check www.greatlengths.net.