NFL Draft Predictions: Which Player Will End Up Where? 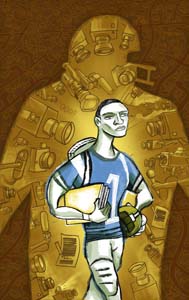 2. St. Louis Rams: Look for the Rams to select DE Vernon Gholston (Ohio State) to build up their defense.

3. Atlanta Falcons: With three picks on the first day, they start with DT Glenn Dorsey (LSU).

4. Oakland Raiders: The speed of RB Darren McFadden (Arkansas) gets Al Davis to pull the trigger.

9. Cincinnati Bengals: With one of the worst defenses in football, look for them to shore up the middle with DT Sedrick Ellis (USC).

10. New Orleans Saints: After a season lost on the defensive side of the ball, the Saints will first take a defender – CB Dominique Rodgers-Cromartie (Tennessee State).

11. Buffalo Bills: They’re on the rise, but will need more firepower to get there. They grab the first receiver in the draft, WR Devin Thomas (Michigan State).

13. Carolina Panthers: The front office is in the hot seat and use this pick to generate a pass rush with DE Derrick Harvey (Florida).

14. Chicago Bears: There’s no QB to take this high, so the Bears bring in some help for Cedric Benson – RB Rashard Mendenhall (Illinois).

16. Arizona Cardinals: With the offensive tools in place, they improve their secondary by drafting CB Mike Jenkins (South Florida).

17. Minnesota Vikings: They hope to strike it rich two drafts in a row by improving their pass rush and taking DE Phillip Merling (Clemson).

20. Tampa Bay Buccaneers: They need receivers, but take the best cover man on the board: CB Aqib Talib (Kansas).

23. Pittsburgh Steelers: Their line took hits, so look for them to fill the void with OG Branden Albert (Virginia).

25. Seattle Seahawks: They look to end their poor track record at the position by selecting TE Dustin Keller (Purdue).

26. Jacksonville Jaguars: The Jags have to get after Peyton Manning, so they add pass rusher DE Calais Campbell (Miami, Fla.).

28. Dallas Cowboys: Tony Romo will get another pair of hands when they draft WR James Hardy (Indiana).

30. Green Bay Packers: They look to the future of the secondary and select CB Antoine Cason (Arizona).

The 2008 NFL Draft will be televised beginning at noon April 26 on ESPN.