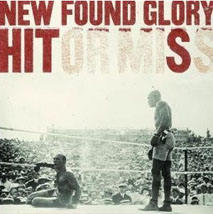 These guys have racked-up nearly three million units in sales, so don’t snicker that this collection of favorites is called Hits. Ten of the 12 inclusions can be found on past albums, and the songs are pretty much stacked in chronological order, so you can relive the band’s rise to fame beginning with the buoyant emo of “Hit or Miss (Waited Too Long),” from their self-titled major label debut in 2000, right through to “Hold My Hand,” from 2006’s Coming Home.

Two previously hard-to-find cuts frame the oldies, and they prove to be goodies worth waiting for. The album starts with a highly polished melodic rocker called “Situations” that, until now, was only available for one month as a streaming cut on the Warped Tour Web site. The compilation closes out with “Constant Static,” a speedy dressing-down of a lover who complains all the time, that was previously released only as a bonus track on a Japanese collection.