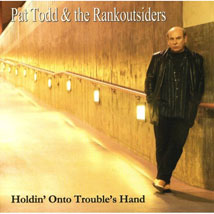 Todd is a guitarist and vocalist who dwells primarily in the rock ’n’ roll rave-up realm, and more than half of the 20 cuts presented here fall into that category. Probably half of those songs should have been left off the album as they tend to all sound alike after awhile; a similar fate has befallen many (shorter) George Thorogood albums.

Todd is at his most interesting when he tones it down a bit, like when he channels a hillbilly Elvis Costello for “King of Drugs.” With the ability to sound a little on the deranged side, Todd sings some of these tunes, “Wrong Turn” in particular, like an edgy John Hiatt.

And of course when you’re dealing with Chuck Berry-inspired boogie you’re bound to find something that sounds like early Stones, and that’s here in the form of “Long Love Letter” and “The December 12th Blues.”