The Sword: Gods of the Earth
(Kemado) 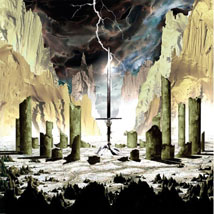 In the mid-1980s, bands like Saint Vitus and Trouble listened to a lot of early Black Sabbath and decided to put “heavy” back into “heavy metal” by turning up the overdrive, emphasizing low-end tonality and slowing the songs down. Other bands gravitated toward this sound, and, in time, the subgenre of “stoner doom metal” was born.

Austin, Texas’ the Sword formed in 2003, inspired by some of the “stoner” bands. Yet as this band reveals on Gods of the Earth, its new album, it cannot be easily classified in any ready-made metal category. Calling this music “stoner doom” underestimates the work ethic that must have gone into its creation, because this is high-energy rock.

Songs like “The Frost-Giant’s Daughter” sound like four or five of Iron Maiden’s best riffs stitched seamlessly together into one song. Lyrically, the Sword focuses on melancholic themes of mythic war and Nordic-style demigods, which can be quite daunting. Yet as epic as the songs are, in three to four minute blasts they never overstay their welcome.

The highpoint of the album is “To Take the Black,” which stampedes through rolling drum breaks and even acoustic-guitar flourishes. All the while, singer-guitarist J.D. Cronise avoids the ubiquitous “cookie monster voice” of so much latter-day metal, opting for something more reminiscent of Rob Tyner of the MC5.

Gods of the Earth is currently available.