'Phineas and Ferb': USC Alum Dan Povenmire Has A Hit On His Hands 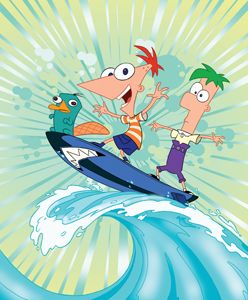 Remember the good ol’ days, when you would willingly wake up early on Saturday only to spend the next four hours watching cartoons? You may feel like you’ve outgrown cartoons, but Disney Channel’s new series, “Phineas and Ferb,” seriously stirs up some Saturday morning nostalgia.

Dan Povenmire, a USC Film School alum, is one of the creators of this new show. Having worked on shows such as “The Simpsons,” “Family Guy,” “Looney Tunes,” “Hey Arnold!” and “SpongeBob SquarePants,” Povenmire has plenty of experience when it comes to animated shows, and he brings this experience to the very entertaining “Phineas and Ferb.” Even the conception of the show began with childlike imagination.

“I was in a restaurant with butcher paper and crayons on the table,” Povenmire recalls. “I just started doodling and came up with this triangle-shaped kid that I liked.”

After tearing off the butcher paper to take home with him, he came up with the rectangle-shaped kid alongside the triangle-shaped one to create Ferb and Phineas, respectively.

As for inspiration, Povenmire is a big fan of Bugs Bunny and “Tom and Jerry,” whose influences can be seen in “Phineas and Ferb.”

“[Those shows] have a great blend of visual gags and clever writing,” Povenmire asserts. “You can turn off the sound and still find it funny.”

The premise of the show falls into that genre of absurd and episodic comedy that has come back in recent years in full force with “SpongeBob” and “Foster’s Home for Imaginary Friends.” Even though many shows can be filed under this genre, and even though the show oozes a nostalgic charm, the show can still stand on its own.

Episodes often feature several plotlines at once involving the cool and unbelievably smart Phineas and Ferb, the hysterical Candace and the downright awesome Perry the Platypus and Dr. Doofenshmirtz (the latter voiced by Povenmire), and by the end of the episode the separate plotlines all converge.

Povenmire goes one further and, along with his partner, tries to come up with a song for every 11-minute episode. They’ve already generated quite a bit of content, with songs ranging from heartfelt ballads to classic rock ’n’ roll, and from folksy tunes to catchy jingles about make-believe holidays.

The most important factor that goes into making the cartoon a great one, though, is simply having fun.

“I get to go to work and draw silly pictures and draw silly gags,” laughs Povenmire. “This is what I’d be doing if I was unemployed – except now I get paid to do it.”

So, even though your younger sibling may have taken the reins when it comes to watching cartoons, give this one a shot – you’ll definitely remember those days of eating too much cereal and getting sore from sitting still too long.

“It’s nothing but fun,” states Povenmire.

“Phineas and Ferb” airs Saturdays at 8:30 p.m. on Disney Channel.