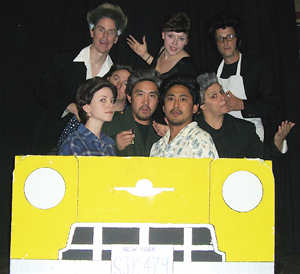 This post-modern series of interlinked comedic sketches puts the audience in the shoes of Christopher Walken, or at least how actor-writer-director Patrick O’Sullivan might picture him, through the talented acting of nine Walken impersonators.

Sometimes the sketches called for audience participation such as the improvisational “Choose Your Own Walken” segment, where the audience was asked to choose several movies to have the Walkens act out. But, the show consisted mostly of pop culture riffs (like an MTV-inspired episode of “The Real Walkens”) on the cult sensation that he is and the fun that his stilted style of speech allows.

These parts were among the most entertaining because it allowed the cast to really show their range for impersonation and the characters they had created. Cast member Amy Kelly, in particular, stuck out with her aggressive style of physical comedy at times and exaggerated De Niro impression.

Overall, the experience was hit or miss, sometimes vulgar, but definitely a very fun night out.