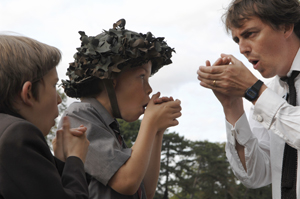 Imagine you’ve grown up in a world where television and movies are verboten.

Now imagine someone sneaks you a contraband video cassette, VCR and TV. For the first time, images flicker before your eyes. Not just any images, either – someone has given you a copy of the Stallone spectacular First Blood, where Sly takes on an army of men with just a knife and a stick ... and he wins. To call the experience mind-blowing would be an understatement.

So begins Sundance sensation Son of Rambow, Garth Jennings and Nick Goldsmith’s delightful follow up to their 2005 hit The Hitchhiker’s Guide to the Galaxy.

Set in England during the summer of 1982, Rambow follows Will Proudfoot, a quiet but imaginative 11-year boy whose family are members of the Plymouth Brethren, a puritanical Christian group that forbids “worldly influences” like films, television and music. When Will meets Lee Carter, his school’s notorious miscreant, an unlikely bond is forged over First Blood and they set off to shoot their “sequel,” Son of Rambow.

Co-written by Jennings and Goldsmith, Jennings describes their division of labor as extremely collaborative: “We’ve worked together on everything we’ve done since we left school. Even though Nick is the producer and I’m the director, we do everything together. We think the best way to do this job is as a team.”

Rambow is “very much based on our own stupid experiences” says Jennings. “It was coming out of these little movies I used to make as a kid.”

Jennings’ childhood forays included work that he describes as less than masterful. For example, when he wanted to show a shed on fire, he waved a piece of burning paper in front of the lens. You can hear him in the background proclaiming, “This is brilliant. Brilliant!”

The film celebrates what Goldsmith calls “that time in your life when anything is possible. You didn’t understand the fear of consequences. You just do stuff, and if things go right, they go right. If they go wrong, they go wrong. But it didn’t matter, it was the joy of doing it.”

“We found these two that had never ever acted in anything before, except one had been a munchkin in the school play,” says Jennings. “They were two of the nicest, most delightful people I’d ever met, and they had no idea how good they were. Absolutely no idea.”

“They were so themselves, but still able to be other people,” gushes Jennings. “Our job was just to keep them from becoming self-conscious. So there were no monitors on set, no playback. The first time they ever saw themselves on film was at a screening.”

Rambow feels very much like early, British Spielberg. While he was an inspiration, “we get influenced by very odd films,” admits Jennings. “Certainly Singin’ in the Rain. When we shot the stunt sequence, it reminded us of Gene Kelly donning goggles and motor biking into a shed. Another film we loved the arc of was Midnight Cowboy. That doesn’t have any tonal similarities to our film, but we loved the idea of this naïve man and despicable rogue striking up an unlikely friendship.”

And what did Rambo think of Rambow?

“[Stallone] saw the film, and he loved it,” Jennings beams, “He sent a lovely message through the studio and was so complimentary. We got his blessing, and we couldn’t have asked for more.”

Son of Rambow releases in select theaters May 2.