Hats Off: To the Remarkable 93-Year-Old, Mimi Weddell 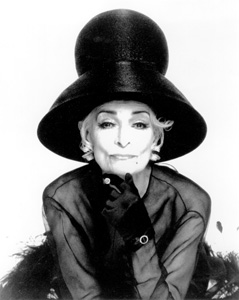 With this feature-length documentary, filmmaker Jyll Johnstone affords us a glimpse at the history and day-to-day life of a remarkable woman, Mimi Weddell.

Weddell is an acclaimed actress and model. She’s a mother and a grandmother. She’s a dancer and a dreamer.

She was voted by New York Magazine as one of the “50 Most Beautiful People in New York,” and the honor is well deserved! She collects and wears many hats both figuratively and literally. She’s also 93-years-old and began her acting career at 65.

Powered by her motto “Rise Above It,” Weddell typically spends 14-hours a day auditioning for new roles, working out, doing gymnastics – anything to stay a step ahead of what might make her routine mundane. She has an inherent charm and demeanor that recalls an earlier time in our history when manners and class were de rigeur for people of a certain station in life.

She exudes charisma and a dry, elegant personality but is a vibrant woman and is most definitely living in the present. Her lifestyle, as showcased in the film, shatters any preconceived notions of what it might mean to be a senior citizen. It serves as an example to be followed by people of all ages.

One very important part of her life and lifestyle are hats. They define her mood. One would naturally wonder how many hats she owns, but in keeping true to her philosophy, her focus is on quality, not quantity.

“I feel sorry to say that I really don’t remember [how many hats I own]. It’s probably around 150. I revolve around the hats and the apartment does, too,” she says. “You talk about being frustrated? If you can’t find the right hat, it’s total hell. They are waiting for me downstairs in the car to get off and do a shoot, and I’m looking for the little, old hat I made a thousand years ago for something or other. Also, it keeps me awake at night. I am redesigning my hats in my mind. It’s awful.”

During the course of Hats Off we meet her children and grandchildren and bear mute witness to a somewhat strained mother/child dynamic, each side represented by very different personalities and points of view. Not surprisingly, when asked what motivates her and what role she enjoys most, she says, “I don’t think my favorite hat would be a mother hat.”

Instead she becomes a starry-eyed dreamer as she mentions one of the actual, physical hats in her collection. It’s a vintage chapeau that was once worn by Mrs. Patrick Campbell who originated the role of Eliza Doolittle in “Pygmalion.”

“I tried to emulate her on several different occasions,” she says of the great actress before continuing on to describe the hat with enthusiastic gestures. “It’s an 1890 hat, and the feathers come down like this, and [it has] that piquant, flirtatious look that those hats had.”

Hats Off is a refreshing take on the documentary format, in that, its examination of Weddell doesn’t beat the viewer over the head with a predetermined message or moral. The film allows the viewer to observe the subtleties of her everyday life as it showcases her amazing spirit.

Johnstone was wise enough to let the content of this movie impress you on its own. Doing so allows the film’s impeccable style and gentle demeanor to caress the viewer and showcase Weddell and her story. Hats off to them both.

Hats Off releases in select theaters May 2.