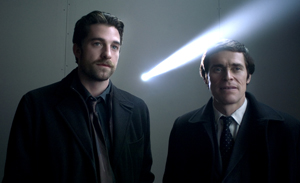 Willem Dafoe is the type of actor who is highly believable as the “man on the beat.” In Anamorph, the actor portrays Detective Stan Aubray.

He’s a gumshoe that must solve Hollywood’s favorite thrill-seeking dilemma: a serial killer on the loose. And what better place for a nutcase to stalk than the streets of New York City?

Even more troubling is that the murderer – much like Italy’s Monster of Florence – has been going around staging elaborate crime scenes that make him or her an extremely sticky wicket when it comes to being captured.

This stylized crime drama is directed by H.S. Miller and pits the venerable talents of Dafoe up against some contemporary talents like Scott Speedman (Underworld) and Clea DuVall (“Heroes”).

Although the look of the project is stark and interesting, ripe with all the aesthetic pleasures (and sicko violence) of a Cronenberg flick, the story and acting are anything less than spectacular.

Anamorph releases in select theaters May 2.