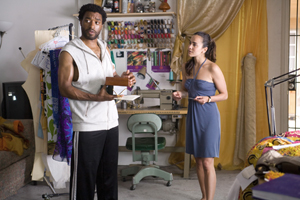 I can’t bring myself to love or hate this movie. It’s a film by David Mamet, one of the pre-eminent writers of our time, so it has to be great, right? Not necessarily.

Mike (Chiwetel Ejiofor) is a good guy. He’s a Jiu-Jitsu teacher and lives his life practicing the principles this Brazilian martial art preaches. For all of his efforts, however, he and his wife (Alice Braga) are barely getting by.

Though the world of professional fighting surrounds him and its prize money is tempting, he cannot compete. He believes that “competition weakens the warrior,” but an unusual series of events leads him to test his morals against those temptations.

Mamet leads his characters in a refreshingly unpredictable direction, but it’s a far-fetched plot that gets them to that end. A more believable storyline would have left you sure you loved the film, instead of trying to decipher why you didn’t.

Redbelt releases in theaters May 2.