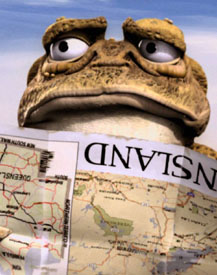 Lewd, demented and generally in bad taste, the kings of tasteless ‘toons are at it again marking Spike and Mike’s 25th anniversary.

Since its beginning in 1990, Spike and Mike’s Sick and Twisted Festival has been the home of cartoons too offensive for the average viewer. Not only are these animated pieces too adult in nature for the mainstream, but Sick and Twisted just may have you question your own moral decency. From cutting edge animation to offbeat hand-drawn cartoons, Spike and Mike’s is the longest running festival of its kind, becoming one of today’s most popular entertainment events among adult ‘toon aficionados.

The Sick and Twisted Festival is the birthplace of "Beavis and Butthead" (Mike Judge, creator of "King of the Hill"). In fact, Spike and Mike produced the first two Beavis and Butthead shorts long before the characters made their first television appearance on MTV. Spike and Mike also premiered "Spirit of Christmas," the original, uncensored "South Park" short by Matt Stone and Trey Parker, "Mutilator" by Eric Fogel (creator of MTV’s "Celebrity Deathmatch") and "Whoop Ass Stew" by Craig McCracken, the first short film featuring The Powerpuff Girls.

Currently, Spike and Mike’s premieres a new Sick and Twisted show every summer, with each festival playing in over 50 cities across the United States and Canada.

Of the collection of cartoons that make up this year’s installment, only two have shown up on past programs. That means you get 23 previously unseen shorts in which unkempt men eagerly lick their own balls, frogs fly out of human anuses, and two-meter chickens prove Jenna Jameson isn’t the only one of God’s creatures that will do anything that moves. No, this ain’t for the kiddies, but it will be a well spent two hours of dirty, tasteless humor that is likely to leave you wanting more.

Spike and Mike’s Sick and Twisted Festival of Animation is currently playing at Laemmle’s Sunset 5, located at 8000 Sunset Blvd. in West Hollywood. For more information, call (323) 848-3500 or visit www.spikeandmike.com. You must be 18 or older to be admitted into the show.