Cinescopes: What Your Favorites Movies Reveal About You 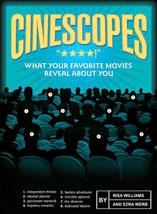 I’m a Dedicated Idealist. If you’re not sure what that means, you can read all about it and find out what you are in Cinescopes, the new book that turns your favorite movies into a personality profile. Ezra Werb and Risa Williams watched and researched over 3,000 films in preparation for writing Cinescopes. It’s a new way of looking at your favorite films and what they could reveal about your personality, fears, dreams and goals.

By simply making a list of your 10 favorite movies and finding their codes in the glossary at the back of the book, you’ll soon discover if you’re a Passionate Maverick, Magical Creator or one of 14 other personality types. You can then read about that personality type and gain a better understanding of why you are attracted to certain films.

I had a personal analysis done by the authors, and it turns out that I’m a Dedicated Idealist. After reading the description, I’d have to say that they’re pretty right on, even though I began to wonder how they determined this when I found out that more than half my listed films were not in their glossary.

Despite lacking some of the films that I listed, the psychoanalysis seems well-researched and founded. It should be. After all, Williams has a master’s degree in psychology and Werb works as a behaviorist. After reading some of the other personality descriptions, I began to diagnose my friends as well.

I asked the authors how they could possibly code over 3,000 movies and deduce 16 distinct types. They freely admit that they’ve not seen every movie in their glossary, but they research in detail the characteristics of the protagonist of each film and then code them. They also mentioned how certain groups of people tend to like similar films and end up with similar profile outcomes, but oddly there’s not one of the 16 different personality types that appears more often than the others.

After reading the book and thoroughly perusing the glossary, the book is insightful, but not unpredictable or terribly exciting once you get the idea of what they’re looking at. I was also quite disappointed in the amount of movies left out of the glossary.

With Cinescopes, Ezra Werb and Risa Williams have found a fun and enlightening way use film to describe personality traits, much like astrology uses the stars. It’s definitely something that every film geek should own. It provides a new way to show up our friends with our movie knowledge.