Forever the Sickest Kids: Infectious in a Good Way 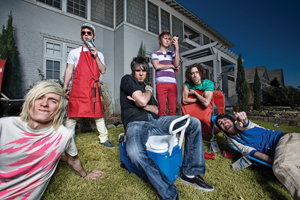 The halls of rock past and present are lined with portraits of bands that made it big by accident, the vast majority of which we as a society will look back on in five years (or less) and cringe at our own bad taste. For the powerpop rockers of Forever the Sickest Kids, however, the online faux pas that catalyzed their popularity may be one that benefits the modern rock scene and its constituent listeners. And for once, it’s something that doesn’t involve x-rated pictures taken on a Sidekick.

The story goes that after an accidental purchasing of featured ad space on PureVolume, the Dallas natives were under the gun to record a song, because until then … they didn’t have anything to feature. Three days later, “Hey Brittany” was offered up to the Web-surfing public, and the fan support started pouring in, followed quickly by label attention.

After signing to Universal, the band continued its condensed work schedule to write and record their debut album, Underdog Alma Mater.

“It was really a time crunch. Whenever we weren’t in the jam room writing as a band, we felt we had to be writing on our own, either acoustic or on our computers,” says keyboardist Kent Garrison. “The pressure was good for us, it got our creative minds thinking when we were practicing. Of course we’d like more time to write music, but it really brought the songs out of us, and we can’t wait for kids to hear it.”

With a self-assuredness in who they are that belies both their ages and the short amount of time they’ve been together as a band, Garrison and his band mates – bassist Austin Bello, drummer Kyle Burns, vocalist Jonathan Cook and guitarists Marc Stewart and Caleb Turman – pride themselves on their stylistic diversity.

“We have some songs that are more techno’d out, we have an acoustic track, we have some straight up rock songs, we have a ballad and some other stuff,” says Garrison. “We really tried to get into every type of song we could on this record and show what we’re all about.”

Balancing that confidence is also an awareness among the band members that not everyone is going to be showering their band with praise.

“That was something our label brought up to us, that since we are a brand new band we are going to get some hate, so they had us go on the road and grind,” says Burns. “They threw us in a van and made us tour for the entire summer with hardly any money. We thought major label bands have tour buses and all this stuff, but they’re making us go out there and work for it.”

Echoing these sentiments, Garrison adds, “We had never been on the road before as a band, then we toured all summer by ourselves and it really helped us grow. If we didn’t do some of the things we did last summer, we wouldn’t have written some of the songs we wrote and wouldn’t have the record we have right now so it definitely worked out for the best.”

Luckily, the band has a full support team behind them to help maintain balance and keep them grounded amidst the ever-increasing chaos being a member now entails.

“How I was brought up definitely keeps me sane on the road,” says Garrison. “We all come from great homes, we have great support and they’re always talking to us, saying ‘don’t forget who you are and who you were brought up to be.’”

As such, Garrison and his band aren’t taking anything for granted nor are they about to get egos over their quickly growing fan base.

“Any opportunity we get, we try to stay out after the shows and talk to all the kids. We want to be best friends with everyone at a show and hopefully, they see us like that, too,” he says.

With that appreciation for both where they’ve been and the people who will get them to where they’re going, along with the work ethic to maintain their longevity, these guys just may prove that even in this modern scene of fleeting one-hit artists, some things can last forever.