The Mezzanine Owls: L.A. Outfit is the Answer to the '90s British Invasion 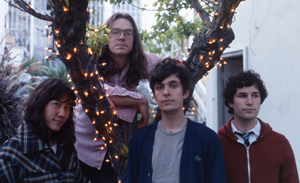 Mezzanine Owls weren’t formed in the United Kingdom, but they’ve accomplished making a sound that rivals the best acts of the UK’s shoe-gaze and post punk eras. Jack Burnside, Dan Horne, Pauline Mu and Jonathan Zeitlin make up the quartet that makes you want to turn off the lights and dance in the dark while getting your heart ripped out, then placed back in with a warm and fuzzy coating. Yeah, it’s like that.

The Owls excel in crafting robust and memorable melodies, with soaring choruses and a bittersweet sensibility about life and human emotions. Burnside and Zeitlin are the primary songwriters of the outfit that’s permeating Los Angeles’ music scene like a hot bullet shot out of a glock with a silencer.

“We both have a common thread of not having a deliberate handle on what the songs are about; we do that so people can explore them and draw their own conclusions. [The songs] start somewhere and evolve from there. I don’t think any song is about one specific emotion,” says Zeitlin.

“It starts with a piece or a phrase or a word, a chord progression, a punctuation, a question mark, a clause,” continues Burnside until Zeitlin joins in. “It starts with a colon or a semicolon.”

Don’t let the moodiness of the CD fool you; offstage, the pair can easily headline the Comedy Store in Hollywood.

“It’s really about beginning with something and allowing the process to work itself out and find its own meaning,” says TK.

The, as of yet, unsigned L.A. band recently released its self-titled sophomore CD under Jaxart Records. The four-track CD LP is a dreamy concoction of shatteringly loud, droning neo-psychedelia with a moody, mysterious kind of ambience.

Burnside’s vocals are buoyant one minute and cavernous the next. The songs build and flow as if they were actual living beings.

The only thing wrong with this CD is that there aren’t more tracks! “Drift” is a beautiful track that sounds like Placebo crashed head on with Pavement. On the other hand, “Temporary Health” is a temperamental song that fluctuates from loud and bleary guitars to jangly and almost ballad-y arrangements. “Ghost Ship” is reminiscent of Joy Division if they were into ’50s doo-wop, while in “Snow Globe,” Burnside manages to make losing your mind sound romantic.

The new work follows their debut EP, Slingshot Echoes (2006), that sounds like running though an enchanted forest where the darkest, most exciting and heartfelt fairytales are formed. For that work, the band enlisted the help of friend and music guru Andy Lemaster (Now It’s Overhead, Bright Eyes, Azure Ray). Made in Lemaster’s studio in Athens, Ga., the CD exposed the robust yet melancholic Burnside, as well as the ethereal orchestration of fuzzed out guitars, layered with reverb effects.

Like their previous work, Mezzanine Owls is a stunning piece of work that leaves you to wonder: Why doesn’t everyone know about them? Why do they still have day jobs?

Rest assured there will be more to come from the Owls: they’re in it for the long haul.

“I think if you love something, you should keep doing it. If you really enjoy something, like we really enjoy making music then you just keep making it. There are periods where it comes quickly and easily, and there are periods where it’s like trying to get blood from a stone,” explains the singer. “The most difficult part is trying to make music that you feel is representative of your experiences while matching it up with stuff that you enjoy. It’s hard to make sure you come up with something new as opposed to just improving on other things.”

Mezzanine Owls is currently available in the form of a 7” vinyl release, as well as a digital download. Mezzanine Owls will perform every Monday night in May at Spaceland. For more information, visit www.mezzanineowls.com.