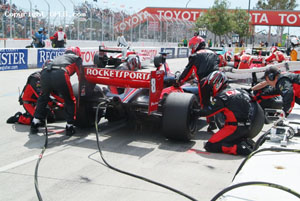 The IndyCar Series has a lot to look forward to when it takes over the Long Beach Grand Prix next year. Its darling driver, Danica Patrick, became the first woman to win a major open-wheel race in history (in Motegi, Japan) on the eve of the final Champ Car World Series running its final laps at the popular Southern California event.

Champ Car concluded its final hurrah in Long Beach, but not without a last ditch effort to reclaim past glory. A race that at one time had a larger fan base than NASCAR stock car racing, last weekend’s Long Beach Grand Prix served as an opportunity for Champ Car to re-establish itself as one of the sport’s elite.

Thanks to Will Power and Mario Dominguez, the Champ Car World Series may find itself back on the path to finding its glory days even though they closed shop at the Long Beach Grand Prix on April 20. This year’s race was the final one for Champ Car, which merged with Indy Racing League in February.

In his third career victory at the Toyota Grand Prix of Long Beach, Power, who raced for Kalkhoven and Co., won the final race in the Champ Car World Series. The Australian led in 76 of the 105 laps after taking his first lead on the first corner of the 1.968-mile circuit through the streets of downtown Long Beach.

In second place was France’s Franck Montagny, who finished 5.094 seconds behind Power. Mexico’s Dominguez finished third, which was a symbolic finish. It was the first time he or his team finished on the podium. His Pacific Coast Motorsports operation was one of the smallest to compete in the race.

This year’s Grand Prix was the last to use Champ Car-specific Panoz car and Cosworth engine, developed for the series in 2007.

Nine drivers have now moved to the IRL full-time, which began April 27 at Kansas Speedway. Points from the Long Beach and Motegi, Japan races both count toward the championship.