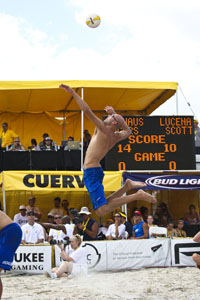 One year removed from the retirement of a volleyball icon, the AVP Crocs Tour returns in 2008 building upon last year’s momentum as a new generation of sand athletes continue to attack the net and build a fan base.

The 2008 Tour already had a strong start in Miami and Dallas, where Phil Dalhausser and Todd Rogers picked up from where they left off last year – winning early and maintaining their position as favorites. The duo has won 20 of 33 AVP events they have competed in and improved to 10-0 in match play this season.

Things are no different on the female side, where Misty May-Treanor and Kerri Walsh, also winners in several cities on the 2007 tour, won in both Miami and Dallas this season. May-Treanor and Walsh have won 22 of their past 25 AVP events and are now 53-7 in AVP championship matches.

In addition to showcasing their talent on the AVP Tour, both teams are also preparing for the Summer Olympics in Beijing. Both teams have virtually locked up spots on this summer’s U.S. Olympic Team and hope to be playing their best volleyball leading up to the Beijing Games.

With Miami and Dallas already out of the way, the next stop for the AVP Tour is Huntington Beach on May 2 through 4. The Tour will then move on to Charleston, S.C., Louisville, Ky., and Atlanta, Ga., before returning to Hermosa Beach on June 6 through 8. On July 25, beach volleyball fans can catch the tour in Long Beach or in San Diego the following week (Aug. 1 through 3).

The Tour will make a stop in California’s Central Coast on Sept. 6 through 7, and return to Southern California for the final time on Sept. 19 through 21, where the Tour’s flagship event will take place in Manhattan Beach. Five days later, the Tour concludes in Glendale, Az.