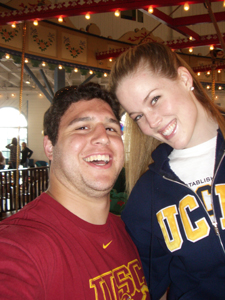 The legendary rivalry between USC and UCLA is as intense as the one between the Capulets and Montagues, so that a Trojan and a Bruin dating are like a pair of star-crossed lovers.

But you just can’t help whom you fall for, even if it is the “enemy.” Such is the case for USC sophomore Garrett Nolan, 20, and UCLA junior Kristen Eck, 21, an inter-rival couple that have been together for about a year.

Eck, an Anthropology major, and Nolan, a USC Football Player, are subject to odd encounters all the time whenever they sport their respective garb out in public.

“When we walked out of [this] restaurant, this car drove past us with a woman and a man inside. They looked over, stopped the car, backed up, rolled down the window and said, ‘How does that work?’”

She wondered the same thing.

“The first time I met him all he talked about was SC football, and I remember thinking, ‘This isn’t going to work out,’” she says, laughing.

Eck grew up a Bruin; her dad played football for UCLA, and she frequently attended Rose Bowl games as a kid.

“I’ve been very conditioned to think, ‘we’re the good guys. They are the bad guys,’” she says.

Likewise, Nolan grew up in a Trojan household, with his grandfather, uncle, sister and cousin as alumni. His childhood dream was to play football for USC.

It’s not easy being an inter-rival couple, especially when Eck lives in Westwood and her Trojan boyfriend loves to visit and parade around wearing his USC shirt and taunt the Bruins.

“This year, with the basketball game when we beat them, I called her up and said, ‘I don’t know if you know, but we won today! Bye!’ Click!”

“I was so mad!” Eck says. “But neither of us take it that seriously.”

Besides going to rival schools, their problems are the same as any other couples: finding time to hang out and trying to find something to do together besides the same old thing every night.

Although they share a love for Disney films (Nolan’s other lifelong dream is to play Gaston in Beauty and the Beast), going to the video store is not a picnic.

“We always go to Blockbuster and we always end up getting upset because I want to see a certain movie, but she’s already seen it or she doesn’t want to see it. And we end up leaving all disgruntled,” he explains.

Instead of another doomed Blockbuster night, Eck and Nolan decided to create a date on a new site called PlanJam that allowed them to combine their common interests and partake in a new adventure. Combining their love for the beach, they began their date (donning their respective school garb, of course) at the Santa Monica Pier where they had an oil painting done, checked out the aquarium and rode the carousel, which made for an amusing moment.

Eck explains, “There were college-aged kids working the booth and they looked at us and went ‘uh,’ and the guy in back of him goes, ‘Go Stanford!’ And we were like, ‘what?’ And he explained, ‘it’s because usually when someone with an SC shirt walks up we go, ‘Go Bruins!’ and when someone with a UCLA shirt walks up we go, ‘Go Trojans!’ And then you guys walked up, and we didn’t know what to do!’”

Next up was a psychic reading, which both Nolan and Eck call “interesting.”

“One of the first things she tells me is, ‘Is that your boyfriend?’ And I said “Yeah,” and she said, ‘You’re not soul mates.’” Eck continues, “But you were soul mates in a past life, and that’s why you guys feel so close, but it’s not meant to be.”

“The next day I was just laughing and writing on her Facebook wall, “non-soul mate!!”” Nolan jokes.

Despite surprising psychic revelations, “it was fun because we actually went out and did something,” he says. “It’s just nice because they give us places to go…”

“…that are cheap instead of movies or food,” she finishes.

PlanJam is a useful site that helps you plan a perfect date or to find new things to do, and also has articles and city guides. Its listing of activities is impressive, ranging from hot air balloon rides to the unconventional, such as a category for “Haunted Spots.”

Here’s how the site works: just input your zip code, and select your ‘scene,’ from ‘girls night out’ to ‘romantic.’ Next, a selection of activities will be displayed according to your scene. Once you choose your activities, PlanJam will automatically calculate the cost and time of your date.

Ron Zvagelsky masterminded PlanJam while sitting in his entrepreneurial studies class at USC, simultaneously thinking about a date he had with a girl that lived in Sylmar, about 25 miles away from where he lived in West Los Angeles.

“I thought, OK, so I have to drive there [from West L.A. to Sylmar] and pick her up, then drive back to L.A. where I know what to do, then drop her back off, then drive back home. It’s a long trip! But wouldn’t it be great if I could find ideas or things to do in that area without having to search for them?”

Since creating PlanJam, friends ask Zvagelsky all the time for date recommendations.

“For some reason, everyone has to date in the evening, right? I think dating should be during the day because there’s just so much more to do,” he says. He suggests going hiking, horseback riding or making pottery.

“Somewhere fun, where we can chat, and that’s not too expensive because college students are on a budget,” he suggests.

Nolan and Eck are sure they’ll use the site again for future dates.

“It gave us ideas,” she adds. “They were really different than what we would normally do.”

While it doesn’t solve college rivalries, PlanJam will solve date-planning frustrations (and will definitely spare those disgruntled nights at Blockbuster Video.)