Adonna Khare: The Re-Emergence of Wonder 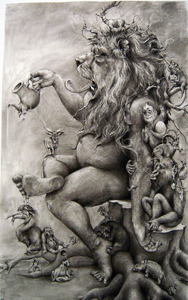 An art major, Adonna Khare really wanted to study biology when she entered CSU Long Beach. It wasn’t until after her right brain balked at the mere math of it that she succumbed to her parents’ gentle wish – that she pursue art.

After taking her B.A. in 2003 and M.F.A. in 2007 at CSULB, Khare got picked up immediately by the Lora Schlesinger Gallery in Santa Monica. Since then her charcoal studies of plants, animals and human bodies have coalesced into an organic riot of form and transformation.

Except for an appearance in the Surrealism Today exhibition at New York’s Nassau County Museum, Khare’s work has appeared exclusively in the greater L.A. area. Her work’s been favorably reviewed in the L.A. Times, Art Ltd. and on KCRW.

To bring things up do date, her current solo show (running though May 10) at the Lora Schlesinger Gallery, By a Thread, has nearly sold out in a mere three weeks. But none of this matters - she just really loves to draw with charcoal, paint with watercolor and oil and, lately, enjoys a little wood whittling.

When she was a little kid, Khare would wake up on summer mornings and, first thing, unroll one of the large scrolls of printer paper that her parents got for her and start to draw. She drew so much she covered the walls of her childhood home and filled up boxes with drawings.

Her parents cherished all of it, and held onto the work until the thin paper started to erode into itself. She laughs about the decomposition of her early work, which indicates how much she embraces nature’s way.

Khare’s work takes its inspiration from life, from explorations in nature and from magical stories. She says that many of her family members are avid storytellers, her aunt especially.

It was her aunt who took her on walks through forests and fields and would ask young Adonna, “Who do you think is in that tree? What’s behind that stone?” Together they would explore the options: fairies, goblins, gnomes or little creatures caught between kingdoms.

This woman who opened Khare’s heart, mind and stylus to the wonders of creation and imagination is now in her 90s. She traveled far to attend the opening of Khare’s current show.

Once there, Khare’s aunt hovered alone in a chair by the Lioness (68-inch x 42-1/4-inch charcoal on paper), for over an hour. Asked what she’d been doing all that time, she explained she was listening to what words people uttered in the drawing’s presence.

I asked Khare about her intentions as an artist. She talked about the disappearances of magic, of open space and of wonder, particularly in Los Angeles. She wants her art to re-create that feeling of magic and whimsy, both in the world and in people’s hearts

She adds, “If you look behind things, there’s always more.”

More indeed, but who’s afraid of the big bad wolf?

To view more of her work, visit www.adonnak.com or www.loraschlesinger.com.