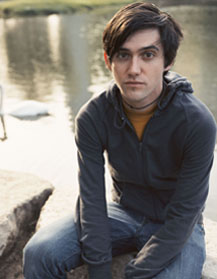 With hair that dangles like a tangled veil over his Harry Potter eyes and songs that sometimes literally cry for attention, 24-year-old Conor Oberst has been indie-rock’s boy wonder for nearly a decade.

Now with two studio albums released simultaneously on Jan. 25 under his Bright Eyes moniker, Oberst also is becoming the hip singer-songwriter to name-check in 2005.

Is the attention warranted? Not yet. But pop culture doesn’t wait for promising artists to mature before showering them with hype. Oberst already has shared stages with R.E.M. and befriended Michael Stipe. A few weeks ago, he received a thrift-store jacket as a gift from another admirer, Bruce Springsteen, after concluding the Vote for Change arena tour.

With the Jan. 25 release of Bright Eyes’ two new albums, the acoustic-flavored I’m Wide Awake, It’s Morning and its more electronic, beat-driven companion, Digital Ash in a Digital Urn (both on Saddle Creek Records), tastemakers from all corners of the music industry and media are jumping at the opportunity to anoint Oberst the "new Dylan." The Los Angeles Times has already proclaimed I’m Wide Awake "the most absorbing singer-songwriter collection since Bob Dylan’s Time Out of Mind eight years ago.

As premature as such accolades are, Oberst’s cult of obsessive fans is expanding. Bright Eyes even briefly entered the same commercial galaxy as Sean "P. Diddy" Combs when the albums’ debut singles were released two months ago. "Lua" and "Take It Easy (Love Nothing)" bowed in the top two slots on the Billboard Hot 100 Singles chart, the first one-two opening by an artist since Combs accomplished the feat in 1997.

Bright Eyes’ previous album, Lifted or the Story Is in the Soil, Keep Your Ear to the Ground, cracked the Billboard 200 and has sold nearly 200,000 copies since its 2002 release, a remarkable figure for an independent album that received virtually no commercial radio or video airplay. It made Oberst and Bright Eyes the icons of the flourishing Lincoln, Neb., scene, something of a self-contained industry with its own label (Saddle Creek), in-house producer (Bright Eyes’ Mike Mogis) and recording studio (Mogis’ Presto). Saddle Creek’s stable of acclaimed indie bands includes Cursive, the Faint and Oberst’s side project, Desparecidos.

Oberst is aware of the hype. But he’d rather concentrate on writing songs. Ask him to assess his recordings, and he’ll say that he isn’t completely satisfied with any of them.

"I remember listening to Fugazi when I was about 13, and realizing that a song could mean something more than just ‘la-la-la,’" says Oberst, speaking in a quiet, halting voice that’s the antithesis of rock-star cool. "Do I ever match that standard? I don’t know if I ever do. I have to feel a certain way about a song before I’ll release it or perform it, but I never really thought, ‘This is the one! I’ve got a hit on my hands!’ It’s more like, I need to keep writing more songs and not judge them.

"For me, the songs are never done. They change every time I play them, or sometimes I wear out on them. There is no ‘right’ version of one of my songs, ever."

Though Oberst has churned out a lot of songs and developed a devoted following that dotes on his every self-absorbed word, he has yet to make a classic album on par with the great songwriters to whom he’s routinely compared (everyone from Townes Van Zandt to Beck). His tremulous voice and stream-of-consciousness lyrics affirm his soul-baring authenticity to his followers but sound overwrought and whiny to his detractors. The Riverfront Times, a St. Louis counterculture weekly, recently named him one of the "10 Most Hated Men in Rock": "Who wants to hear sad, sad songs about the day-to-day pathos of well-to-do suburban white kids?" it mocked.

But I’m Wide Awake and Digital Ash should give the skeptics pause. The country-folk melodies on the former are among his sparsest and most direct, and include vocal contributions from country queen Emmylou Harris and My Morning Jacket singer Jim James, a former skeptic who was won over by Oberst’s passion and sincerity.

"I didn’t really get his music" until they played a show together two years ago, James says. "But that night at the acoustic show, it was very quiet and I really listened and heard some of the things he was saying. He taught me the value of a good lyric, a good phrase, and a clever way of saying something that all of us think but never think to voice. ... He is a cut above most of his peers in creating vivid visual images."

Digital Ash envelops those images in arrangements that are by turns dusky, daring and grand. The two releases are easily the most disciplined albums of Oberst’s career, framing his fervor rather than letting it run wild. Put the best of the two together and Oberst would have his defining statement. But as they are, the albums provide ample insight into a precociously talented artist who keeps testing his boundaries at a prolific rate, as if he were racing time to release every lyric, melody and sound he hears in his head.

Oberst is said to have written a song nearly every day since he acquired his first guitar, when he was about 10. "I didn’t learn scales or Metallica riffs, and I didn’t really learn a lot of cover songs either," he says. "I was immediately interested in putting words together and singing. After I learned a couple of chords, I started making up (stuff)."

Born the youngest of three sons in Omaha to a middle-class family, he was hanging out with an older crowd of aspiring musicians at the University of Nebraska campus in nearby Lincoln before he was even in high school.

"I thought it was so strange to see this 11-year-old kid with long hair coming around playing his guitar," says his future Bright Eyes collaborator Mike Mogis, 30. "They were intelligent songs, even back then. None of us could believe it."

As a class project, Mogis and another dorm buddy, Robb Nansel, created Saddle Creek Records. It soon became an outlet for their friends’ music, including Oberst’s. The young songwriter had been piling up homemade cassettes of his songs while fronting the indie-pop band Commander Venus. Once he heard those solo performances, Mogis was hooked. He dragged his recording gear over to the house of Oberst’s parents, set up in the laundry room, and let the kid roll. "I wanted to preserve the casualness, the informality, the sincerity, but make sure it was more sonically and musically pleasing," he says.

Mogis and Oberst have been joined at the hip musically ever since, surrounded by a constantly rotating cast of musicians drawn from their large pool of friends in Lincoln. Bright Eyes tours habitually pile more than a dozen musicians into a bus, and sell out clubs and theaters across the country. No two touring lineups have ever been alike, and Oberst’s songs have been fleshed out with everything from string sections to kazoos.

"We don’t care about being perfect, it’s more important to keep things fresh," says Mogis of the rotating lineups. He applies the same principle when recording Oberst. "A lot of things today are cut and pasted into perfection, but where’s the expressiveness? Conor comes from the same school of thought: How to immediately convey a thought or feeling."

Oberst’s obsession with immediacy runs pretty deep. He’s averse to repeating hooks or choruses, instead preferring to string verses together until the songs are pushing 10 minutes. He rarely writes anything down, so that the songs feel new every time he steps to the microphone. He aims to capture that moment when "the whole fog of the day hasn’t fully sunk into the brain, that spot between being asleep and being awake." The dreamlike cadences rise and fall between whispers and screams, and the instruments crest and tumble with him.

Amid that off-the-cuff spirit, larger themes begin to emerge. Digital Ash is preoccupied with mortality and the passage of time, Wide Awake with travel and transition.

"Almost every record we’ve made, somebody has called it a concept record," Oberst says. "I’ve always found that strange because to me all records should be concept records. We’ve always been into songs that blend into one another and weird interludes connecting songs and having recurring themes."

Oberst still lives out too many melodramas in his lyrics ("Let the poet cry himself to sleep"), but his music has rarely been more focused or inclusive. He steps into the world, and though he doesn’t always like what he sees ("I read the body count out of the paper/And now it’s written all over my face"), his more outward looking music is a promising sign of greater accomplishments to come.

Mogis sounds like a proud older brother when he traces the growth of his young accomplice over the last decade. "His writing used to be very self-centered, but he’s starting to delve into more universal topics and social issues that affect everybody," the producer says. "He basically used to sing about how depressed he was about girls, but anybody with a little older perspective wouldn’t care. Now he’s better able to articulate the world around him with poetic grace. It’s a huge step, and that’s carried over to the way he makes music.

"Before it was just about his voice and guitar. Now he thinks about how his song involves other people, other parts and instruments beyond what he’s doing. He hears the whole thing now."

I’m Wide Awake, It’s Morning and Digital Ash in a Digital Urn are currently available. Bright Eyes will be playing on Feb. 12, 13, & 14 at the Orpheum Theatre, Los Angeles.