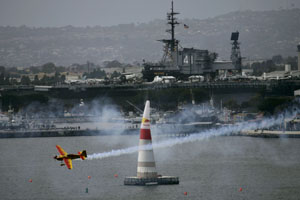 Do not be alarmed by those loud sounds in the San Diego Bay – the world’s best pilots have come out to play. For the second straight year, the Red Bull Air Race World Series returns to San Diego, featuring pilots who will compete in the harbor just outside downtown on May 3 and 4.

The weekend race, which tests speed, precision and skill, highlights fast, agile and lightweight racing planes that will navigate on a low-level aerial track made up of air-filled pylons at speeds up to 240 miles per hour, while withstanding forces up to 10 Gs.

San Diego is one of two American cities and 10 cities worldwide that will host the Red Bull Air Race. This year will feature a new race format that includes the following flying sessions: Training, Qualifying, Point One, Super Eights, Semifinals, Third Place Fly-off and the Final.

Also included is a format introduced in the 2007 race – the knock out format, which takes place in the final three rounds. However, the format is slightly adapted in 2008, which allows for all 12 pilots to demonstrate their skills on race day, regardless of ranking. This new format allows pilots to fly up to four times throughout the course of the day.

“This improved race format fulfills the new safety requirements that were discovered throughout the 2007 season. Pilots will now fly a maximum of three flights per day to counteract the fatigue,” says Heinz Möller, Head of Aviation. “But the most exciting thing about this format is that the crowds will now get the chance to see all pilots perform on race day.”

The Red Bull Air Race will take over the bay between the Embarcadero Marina parks and Coronado in San Diego May 3-4. For more information, visit www.redbullairrace.com.