Lakers vs. Nuggets: Onward and Upward! 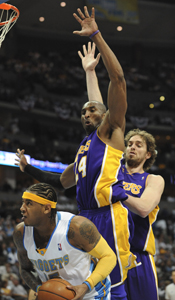 It ain’t over ... but it’s over. After the career defining games of Pau Gasol and Kobe Bryant to start the series, game three showed what the Lakers can do with a total team effort.

With nearly seven players in double figures and the ball moving well, the Lakers looked almost unbeatable against the hapless team from Denver. Nuggets coach George Karl states that, “Kobe, when he’s making his jump-shot, is somewhat indefensible.”

The effort of the Lakers and their strong team play has lead to questions about the Nuggets and their equal desire to win.

“Yeah. We quit. Everybody. From the coaches to the players, we quit. And I said it,” star Nuggets forward Carmelo Anthony fumes.

The Lakers are likely to match up against the New Orleans Hornets – whose star, MVP Candidate Chris Paul, has torched the Dallas Mavericks in their first round series – in the Western Conference Finals. The Hornets might want to avoid getting too chippy with Kobe and the Lakers, as both the stars of the team and the “Bench Mob” – including Jordan Farmar, Luke Walton and Ronny Turiaf – admit to feeding off the energy provided by the anger and emotion of the other team.

“I take it as a challenge when there’s a lot of talking going on. It’s fun. I certainly enjoy it, and my teammates enjoy it. It’s something we all feed off of,” says Bryant.

For the Nuggets, and stars Anthony and Allen Iverson, it may be time to go back to the drawing board. Even after ending the season with 50 wins, it seems as if Denver is a second tier team that will find it hard to get over the hump and compete well with the top teams in the West.

For the Lakers, their first series win of the decade without Shaq might be just what they need to prove they finally belong amongst the top teams in the league.